Reminiscences of Ahmed H.Zewail: Photons, Electrons and What Else? - A Portrait from Close Range. Remembrances of His Group Members and Family (Paperback) 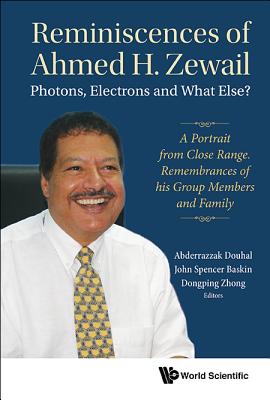 Reminiscences of Ahmed H.Zewail: Photons, Electrons and What Else? - A Portrait from Close Range. Remembrances of His Group Members and Family (Paperback)


Usually Ships in 1-5 Days
In this unique illustrated book, PhD students, postdoctoral researchers, senior visiting scholars, and staff describe their personal experiences in working with the late Prof. Ahmed H. Zewail at Caltech. Their reminiscences provide snapshots of their rich interactions, reflecting the great scientific achievements, as well as the human and humorous sides of Ahmed H. Zewail.The contributors tell us their stories covering a period of forty years, beginning from the time of Zewail's arrival at Caltech in 1976. Some of them cover the time when Zewail was starting his pioneering work on femtochemistry at the end of 80's, while others relate events long after he was awarded the Nobel Prize in Chemistry (1999) and had embarked on a new career in ultrafast electron imaging. The aims and scope of this book is to provide both scientists and non-scientists descriptions of the experiences of scientists in the early or mature stages of their careers when interacting with one of the greatest scientists of the 20th century, from developing the field of femtochemistry to pioneering ultrafast electron diffraction and imaging technology. The personal dimension of Zewail's leadership is reflected in all the contributions, and highlighted by special tributes from two of his children.The scientific and anecdotal stories recounted in the book give a rare view of experiences in shaping science. The reader will get firsthand accounts of how a Nobel Prize winner interacted daily with his co-workers to develop the laser-based science and technology for which he was internationally recognized. The recounted experiences may serve as a basis for scientists developing their own research, tutoring students, and supervising postdoctoral researchers.