What Was I Thinking? (Sternberg Press / e-flux journal) (Paperback) 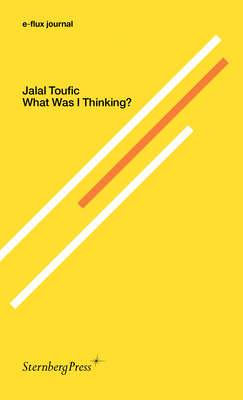 What Was I Thinking? (Sternberg Press / e-flux journal) (Paperback)


Difficult to Find
“What Was I Thinking? is an initiation into thinking. With a mind that is extremely analytical and yet extremely capable of rendering all kinds of knowledge and experiences permeable to each other, Jalal Toufic creates here a 'summa,' but an open-ended one. He looks into the arts as if they were the privileged site of thinking, even when they inevitably fail, and still confronts his insights/thoughts with texts taken from the traditional religions and mystics of the past. He has reached in this work an Olympian attitude—tuned to his basically Dionysian temperament—that announces the beginning of a detachment, of a remarkable serenity (a joy in thinking that Nietzsche had already understood). Jalal Toufic is today, and has been for some time, the most original thinker on the planet. He assumes the challenge stated by Heidegger in What Is Called Thinking? by his own thinking (by writing this book). To imagine the best possible worlds, to go into uncharted territory; these worlds are eminently those of the arts (as he practices them, as he delves into their layers, their paradoxes, their darings, ever admitting their maddening inbuilt inaccessibility). His kind of an endeavor takes a tremendous courage. And a unique freedom: letting his mind go into unpredicted ascertainments, so that his writing 'does not fall apart two days later.' Situated somewhere close to the spirit of Einstein's General Theory of Relativity and Nietzsche's breakthroughs, we can say that Jalal Toufic is indeed a 'destiny.'”—Etel Adnan