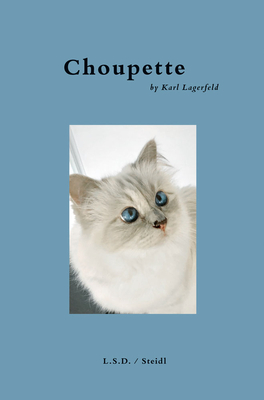 Choupette is the world's most famous and pampered cat: she has two maids, she receives manicures, and only eats at the table off Goyard and Louis Vuitton crockery. Her Instagram account is approaching an enviable 300,000 followers, and now she has her own brand-new book.

Choupette by Karl Lagerfeld is a selection of the iPhone photos that Lagerfeld took daily of his beloved pet and muse. Here we see Lagerfeld's adorable Birman cat in a variety of indulgent poses: perched on a pile of books, curled up in the bathroom sink, and (of course) admiring her reflection in the mirror. Lagerfeld personally chose and sequenced these photos, which reveal a tender, playful look into Choupette's precious world. Karl Lagerfeld (1938-2019) was a fashion designer, photographer and publisher. During his photographic career Lagerfeld received the Lucky Strike Design Award from the Raymond Loewy Foundation, the cultural prize from the German Photographic Society and the ICP Trustees Award from the International Center of Photography. Steidl has published most of Lagerfeld's books, including A Portrait of Dorian Gray (2004), Room Service (2006), The Beauty of Violence (2010), The Little Black Jacket (2012), Villa Noailles, Hy res- t 1995 (2015) and Cassina as Seen by Karl (2018).