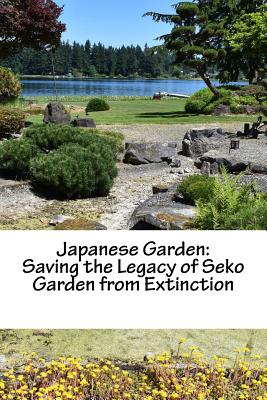 
Usually Ships in 1-5 Days
Hidden in the residential area adjacent to Phantom Lake, Bellevue Washington, is a jewel, a private Japanese Garden called the Seko Garden belonging to Joan and Roy Seko. Conceived and designed by Kaichi Seko, Roy's father, in the 1950's, the garden is now in danger. I have come to understand that the estate must be sold and the future of the garden is uncertain. The story of this garden begins with the birth of Kaichi in 1896 in the Gifu Prefecture of Japan. Gifu Prefecture is home to a number of outstanding gardens including Kokeisan Eihoji Temple Garden by Muso Sosekiand Zenshouji Temple Gardens. When he immigrated to the United States in 1920, Kaichi carried with him the legacies of these fine gardens. He began work in the restaurant business in Seattle but his career was interrupted by World War II and his internment in the Camp at Minidoka, Idaho.
Koichi Kobayashi is a Japanese-American urban designer and landscape architect currently based in Seattle, Washington. Born in Kurayoshi, Tottori, Japan, Kobayashi has more than 50 years' experience in a diverse field of landscape architecture, including planning, design, teaching, and community development. He is a 1972 graduate of the University of California, Berkeley, and, in 1968, of Kyoto University. From 2001 to 2005, he worked in China as Manager of Planning and Design with such firms as EDAW (now known as AECOM) in Suzhou. From 2006 to 2007 he had a similar position in the Dubai office of Burt Hill (now Stantec) where he worked on large-scale environmental and landscape planning projects in the Middle East and India. In this position, he mentored young professionals from around the world. He is currently the principal of Kobayashi Design in Seattle, and is researching and promoting the cause of Japanese gardens abroad, including supporting "Friends of Saving the Legacy of Seko Garden" 2 as a principal. In 2018 Kobayashi was designated Honorary Professor at Eimei University, San Mateo, California