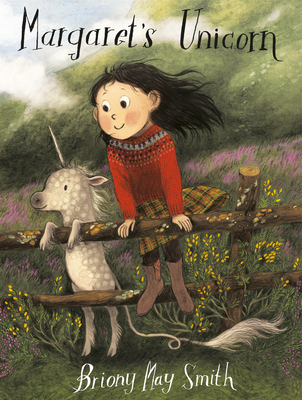 “I want to climb inside Margaret’s Unicorn and live in this magical world. Margaret’s family has just moved to a cottage in the hills to stay with her grandmother when she finds a baby unicorn lost from its tribe. Her grandmother teaches her how to take care of the unicorn, who quickly becomes part of their family, until the next spring, when its mother returns. A beautiful, magical tale about saving wildlife, nurturing it, and knowing when it’s time to return it back to nature.”
— Beth Seufer Buss, Bookmarks, Winston-Salem, NC

A perfect gift for the unicorn lovers in your life, this lovely and utterly transporting picture book tells the story of what every little girl wishes would happen to her: a girl finds and takes care of a lost baby unicorn.

Margaret's whole world changes when her family moves to a cottage by the sea to be near her grandma. One evening, Margaret spots a mist over the water. No, that's not mist...clouds maybe? No, they're unicorns descending onto the shore! They vanish as quickly as they'd appeared, but accidentally leave behind a baby, tangled in the weeds. Margaret, lonely and in need of a friend, brings him home and cares for him through the fall and winter. Together, they chase the waves, stomp on frozen puddles, and build snow unicorns. When spring finally comes around, and the other unicorns return, Margaret's takes her small friend back to his family... but these two won't forget one another. And though Margaret misses him, she has made a new friend, and her new cottage is starting to feel like home. With all the feel of a classic, here is a picture book young readers will want to revisit again and again.
Briony May Smith is a British illustrator who has published titles in the US, including Stardust, written by Jeanne Willis, which Kirkus Reviews called "warm and light." She also both wrote and illustrated Imelda and the Goblin King, which the Wall Street Journal described as "enchantingly illustrated." She has also illustrated numerous picture books in the UK, including Little Bear's Spring, The Giant's Necklace, and Grab That Rabbit! Briony was highly commended for the Macmillan Children's Book Prize in 2013 and 2014, and was shortlisted for the Emerging Talent Category of the British Comic Awards in 2014. She lives in the United Kingdom.

“Children with a taste for the fantasy world who wish for magical encounters should enjoy this sweet, gently told story.” –Kirkus Reviews