Digging for Words: José Alberto Gutiérrez and the Library He Built (Hardcover) 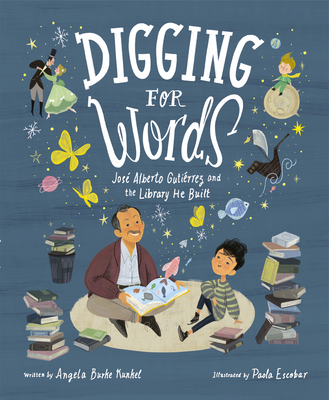 Digging for Words: José Alberto Gutiérrez and the Library He Built (Hardcover)


Usually Ships in 1-5 Days
A gorgeous and inspiring picture book based on the life of José Alberto Gutiérrez, a garbage collector in Bogotá, Colombia who started a library with a single discarded book found on his route.

In the city of Bogata, in the barrio of La Nueva Gloria, there live two Joses. One is a boy who dreams of Saturdays-- that's the day he gets to visit Paradise, the library. The second Jose is a garbage collector. From dusk until dawn, he scans the sidewalks as he drives, squinting in the dim light, searching household trash for hidden treasure . . . books! Some are stacked in neat piles, as if waiting for José́. Others take a bit more digging. Ever since he found his first book, Anna Karenina, years earlier, he's been collecting books--thick ones and thin ones, worn ones and almost new ones-- to add to the collection in his home. And on Saturdays, kids like little Jose run to the steps of Paradise to discover a world filled with books and wonder.

With an evocative text by a debut author, and rich, stunning illustrations from an up-and-coming Colombian illustrator, here is a celebration of perseverance, community, and the power of books.
ANGELA BURKE KUNKEL is a school librarian who lives with her husband, two children, and two rescue pups on the banks of Otter Creek in Vermont. Digging for Words is her debut. Visit her on the web at angelakunkel.com and on Twitter @angkunkel.

PAOLA ESCOBAR grew up traveling from town to town in Bogota, Colombia. She has published with SM Spain, Planeta, Norma, and more. Paola is the illustrator of Planting Stories: The Life of Librarian and Storyteller Pura Belpré, an Indie Pick called "a must-have for all libraries" in a School Library Journal starred review. She lives with her husband and dog, Flora. Follow her on Instagram @paoesco8ar.

"The inspiring story of a man who believes in the power of books and the importance of community." —Kirkus Reviews, Starred Review

“An inviting and generous story that will be a pleasure to read aloud.” —School Library Journal, Starred Review

"This amiable picture book offers children glimpses of Colombia as well as a role model who values books and enjoys sharing them with others…. Simultaneously published in a Spanish edition, Rescatando Palabras." —Booklist