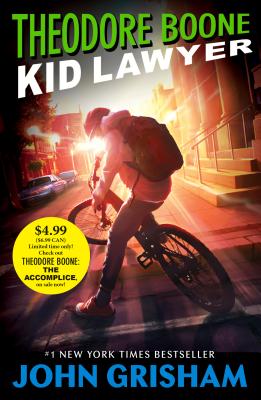 In the small city of Strattenburg, there are many lawyers, and though he’s only thirteen years old, Theo Boone thinks he’s one of them. Theo knows every judge, policeman, court clerk—and a lot about the law. He dreams of being a great trial lawyer, of a life in the courtroom.

But Theo finds himself in court much sooner than expected. Because he knows so much—maybe too much—he is suddenly dragged into the middle of a sensational murder trial. A cold-blooded killer is about to go free, and only Theo knows the truth.

The stakes are high, but Theo won’t stop until justice is served.

Brimming with the intrigue and suspense that made John Grisham a #1 international bestseller and the undisputed master of the legal thriller, Theodore Boone: Kid Lawyer will keep readers guessing and pages turning.

John Grisham is the author of a collection of stories, a work of nonfiction, three sports novels, four kids' books, and many legal thrillers. His work has been translated into forty-two languages. He lives near Charlottesville, Virginia.

Praise for the Theodore Boone series

"Not since Nancy Drew has a nosy, crime-obsessed kid been so hard to resist." -The New York Times

"Gripping . . . I would recommend this book to anyone who loves a good mystery."--Scholastic News