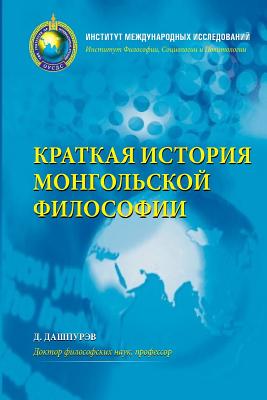 
Usually Ships in 1-5 Days
Mongolian people, rooting their life into great landscape of natural environment and historically and traditionally living their nomadic life, have uniquely cultivated philosophical thoughts corresponding to them. The author attempts their intellectual patterns to be categorized as "Mongolian Philosophy" as he differentiates them from other people's. Their traditional life often with severe and cruel natural environment, upon which they depend their nomadic life and economic productivity, has infiltrated Shamanism in which people worship the eternal Tenger (heaven) and find the creator out in it into "Mongolian philosophy." In the Mongol Empire of 13th century led by Chinggis Khaan, it also played the role to pioneer the philosophically liberal spirit generous to various religious traditions. On the other hand, Mongols under the 5th Kublai emperor's and afterwards followed a long, historical path where politics, for their policy, promoted philosophical thoughts based on a particular religion or imported thought. Namely, Buddhism philosophy from 13th century to 19th and Marxism philosophy in the 20th spread among Mongols with a form of dogmatism under the patronage of then politics. And during the periods, Mongolian people's philosophical thinking was within the political cultures and intellectual limits. It is nowadays when choice freedom for religious and philosophical thoughts and development for information environment are guaranteed after the democratization in 1990 that expected is reconstruction of "Mongolian Philosophy" based on traditional nomadic cultures and reflecting on the whole image of its history. This Russian edition is its 4th, following the Mongolian original, the Mongolian script's published in Inner Mongolia, and Japanese.
Dr. D. Dashpurev is the Founder and the Director of the Insitute of International Studies as well as the Institute of Philosophy, Sociology and Political Science in Mongolia. He served as the Chief of Department of Philosophy, and the Director of Institute of Philosophy and Sociology, in the Academy of Sciences of Mongolia. From 1989 to 1997, he was the Secretary of Working Group of Mongolia-Japan "Gobi Project." He experienced the Associate Professor for the Mongolian Studies at the School of International Studies at the Jawaharlal Nehru University in New Delhi, under the Exchange Program between India and Mongolia during 1990-1995. He has studied in Ulaanbaatar and Moscow, and was a special student in Moscow in 1985 and in Berlin in 1987. He also has visited as a scholar for comparative study on socialist society and communist regime in Bulgaria, Czechoslovakia, East Germany, Poland, Angola and the USSR. Prof. D. Dashpurev was elected as a member of Mongolian Parliament from 1996 to 2000. Dr. Dashpurev has written extensively on modern Mongolian society and has published more than twenty books in this field.