The Case for Mars: The Plan to Settle the Red Planet and Why We Must (Paperback) 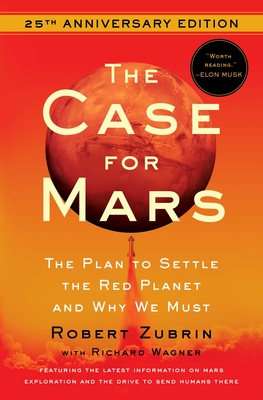 The Case for Mars: The Plan to Settle the Red Planet and Why We Must (Paperback)

By Robert Zubrin, Richard Wagner (With), Elon Musk (Foreword by)


Usually Ships in 1-5 Days
The Case for Mars makes living in space seem more possible than ever in this updated 25th anniversary edition, featuring the latest information on the planet's exploration and the drive to send humans there.

Since the beginning of human history, Mars has been an alluring dream—the stuff of legends, gods, and mystery. The planet most like ours, it had long been thought impossible to reach, let alone explore and inhabit. But that is changing fast.

In February 2021, the American rover Perseverance will touch down on Mars. Equipped with a powerful suite of scientific instruments—including some that will attempt to make oxygen from the Martian atmosphere—the rover also carries a helicopter that will take spectacular panoramic movies from the air. Most exciting of all, a spectrometer onboard may find evidence of fossils left behind by microbes millions of years ago, when the planet was warm and wet, proving at last that life on Earth is not unique, but a general phenomenon in the universe. Meanwhile, in Boca Chica, Texas, Elon Musk’s SpaceX has created a shipyard that is building and testing the vessels that will take humans to Mars before this decade is out.

Leading space exploration expert Robert Zubrin crafted the daring blueprint for humanity’s reach to the Red Planet twenty-five years ago, when he first published The Case for Mars. Now, in this updated edition, he looks to the future once more to describe how—in an era when the American space program and private companies like SpaceX are racing to send astronauts to Mars—our first colonies there are imminent. In the grand tradition of successful explorers, Zubrin calls for a travel-light and live-off-the-land approach to Martian settlement. He explains how scientists can use present-day technology to send humans to Mars, produce fuel and oxygen on the planet’s surface with its own natural resources, build bases and communities, and one day, terraform—or alter the atmosphere of the planet in order to pave the way for sustainable life.

As a landmark new mission opens the decisive campaign to take humans to the Red Planet, Zubrin lays out a comprehensive plan to build life on a new world.
Robert Zubrin is president of Pioneer Astronautics, an aerospace R&D company, and the founder and president of the Mars Society, an international organization dedicated to furthering the exploration and settlement of Mars by both public and private means. He lives with his wife, Hope, a science teacher, in Golden, Colorado.

Richard Wagner is the former editor of Ad Astra, the journal of the National Space Society. He lives in Northhampton, Massachusetts.

“This book shows how a flight to Mars has progressed from fantasy to… a reality.”
— Buzz Aldrin

“One of the most provocative and hopeful documents I have read about the space program in 20 years.”
— Dennis Overbye, The New York Times Book Review

“In this thoughtful, thorough and inspiring book... [Zubrin] systematically and convincingly destroys the conventional wisdom about Mars travel.”
— Newsday