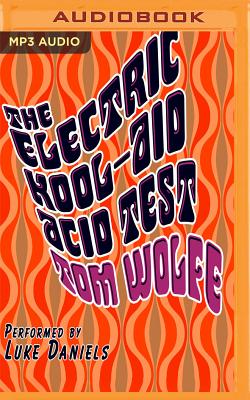 Tom Wolfe - one of the 20th century's foremost voices in cultural criticism - went from local news reporter to international icon in 1968, with the publication of The Electric Kool-Aid Acid Test. Now voiced with vivacity and vigor by Audible Hall of Fame narrator Luke Daniels, the non-fiction swan-dive delves into the world of hippies, hedonism, and everything in between.

To most, Ken Kesey is best known as the author of the celebrated novel One Flew Over the Cuckoo's Nest. But for Tom Wolfe, Ken was the leader of the Merry Pranksters, a band of counter-culture bohemians who traveled cross-country in a far-out, brightly painted school bus they dubbed Furthur. The Pranksters were known for drug-fueled escapades, none more famous than the so-called "Acid Test", wherein a party full of people would take LSD in an effort to escape the banality of reality and connect on a higher, subconscious plane. As Wolfe follows the group down their nonconformist rabbit hole, he's led on a wild trip through the backwaters of the 1960s, encountering the era's living legends - from The Grateful Dead to Allen Ginsberg - along the way.