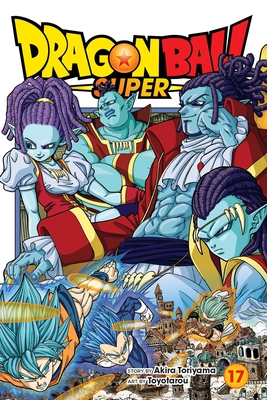 This is book number 17 in the Dragon Ball Super series.

The battle between Granolah, Goku, and Vegeta continues on planet Cereal. Despite this battle being fueled by the lies and manipulation of the Heeters, Granolah’s burning drive for revenge has him convinced that this is a fight worth dying for—and that’s exactly what the Heeters want. Sensing something is amiss, Vegeta begins to piece together the mystery of why Granolah hates the Saiyans so much. But will he be able to figure out the truth in time? And will Granolah even be willing to listen?!
Renowned worldwide for his playful, innovative storytelling and humorous, distinctive art style, Akira Toriyama burst onto the manga scene in 1980 with the wildly popular Dr. Slump. His hit series Dragon Ball (published in the U.S. as Dragon Ball and Dragon Ball Z) ran from 1984 to 1995 in Shueisha's Weekly Shonen Jump magazine. He is also known for his design work on video games such as Dragon Quest, Chrono Trigger, Tobal No. 1 and Blue Dragon. His recent manga works include COWA!, Kajika, Sand Land, Neko Majin, Jaco the Galactic Patrolman and a children's book, Toccio the Angel. He lives with his family in Japan.