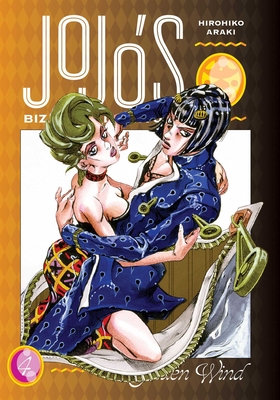 The high-speed conflict continues! The express train is zooming its way to Florence, and the squad is hanging on for dear life—literally! They’re under siege by their foes, desperate to protect their charge, and facing an all-new enemy Stand. The stakes have never been as high as this, and to make matters worse, escaping the train doesn’t mean they’ve escaped the danger!
Hirohiko Araki made his manga debut in 1981 with the Wild West story Busô Poker. He experimented with several genres, including mystery (Mashonen B.T.) and action-horror (Baoh), before beginning JoJo’s Bizarre Adventure in 1986. Propelled by imaginative storylines, weird imagery and individualistic artwork, JoJo’s Bizarre Adventure is one of the longest-running and most popular shonen manga ever. Araki’s current works include a new series set in the JoJo universe, JoJolion.