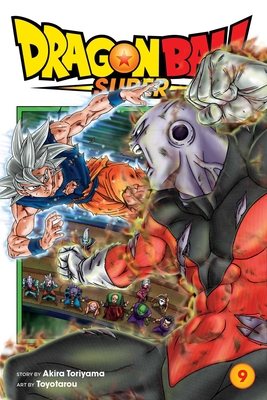 This is book number 9 in the Dragon Ball Super series.

The Tournament of Power is nearing its end, and only a few warriors from Universe 7 remain to fight Universe 11’s Jiren. Goku struggles against Jiren’s endless onslaught of attacks, and things start to look grim. It seems like the only way Goku can defeat him is by tapping into the power of Ultra Instinct—something he’s never been able to do before! Will he be able to master it in time to defeat Jiren and save Universe 7?! Meanwhile, back on Earth, Boo is about to get Boo-napped!
Renowned worldwide for his playful, innovative storytelling and humorous, distinctive art style, Akira Toriyama burst onto the manga scene in 1980 with the wildly popular Dr. Slump. His hit series Dragon Ball (published in the U.S. as Dragon Ball and Dragon Ball Z) ran from 1984 to 1995 in Shueisha's Weekly Shonen Jump magazine. He is also known for his design work on video games such as Dragon Quest, Chrono Trigger, Tobal No. 1 and Blue Dragon. His recent manga works include COWA!, Kajika, Sand Land, Neko Majin, Jaco the Galactic Patrolman and a children's book, Toccio the Angel. He lives with his family in Japan.