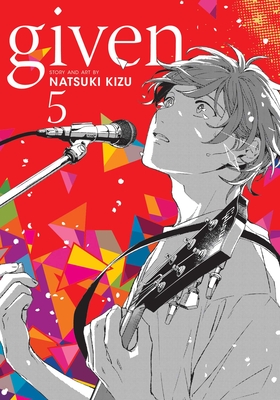 This is book number 5 in the Given series.

The final round of the music festival tryout is about to begin, but that’s not the only source of tension in the band. Mafuyu, who’s been spending a lot of time at Ugetsu and Akihiko’s place, learns about the complicated history between the two and realizes that Haruki’s heartbreak is part of that romantic tangle. Things come to a head during the band’s performance, where the emotions unleashed by Mafuyu’s new song will change the course of their lives forever.
Natsuki Kizu made her professional debut in 2013 with Yukimura Sensei and Kei-kun, followed by the short story collection Links and her breakout series, Given, which has been adapted into drama CDs and an animated TV series. To find out more about her works, you can follow her on Twitter at @kizu_ntk.