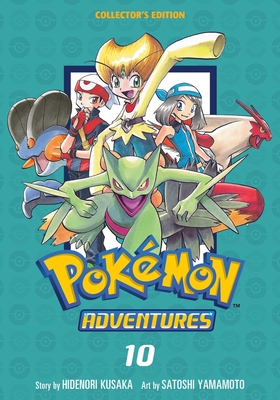 This is book number 10 in the Pokémon Adventures Collector’s Edition series.

The conclusion of the original Pokémon Adventures!

Professor Birch sends Ruby and Sapphire to help Emerald find the Wish Pokémon Jirachi. But first there are fierce Pokémon battles to fight in the Battle Dome Tournament!

Then, Professor Oak sends Gold and Silver to help rescue Red, Yellow, Blue and Green—who have all been turned to stone!

Along the way, Gold and Silver must battle a fearsome creature that Archie, the former leader of Team Aqua, wished into existence using the powers of the Wish Pokémon Jirachi that Ruby and Sapphire found!

Collects the original Pokémon Adventures 28 & 29!
Hidenori Kusaka is the writer for VIZ Media’s Pokémon Adventures. Running continuously for over 20 years, Pokémon Adventures is the only manga series to completely cover all the Pokémon games and has become one of the most popular series of all time. Kusaka is currently working on the 14th story arc, Pokémon: Sun & Moon. In addition to writing manga, he also edits children’s books and plans mixed-media projects for Shogakukan’s children’s magazines. He uses the Pokémon Electrode as his author portrait.