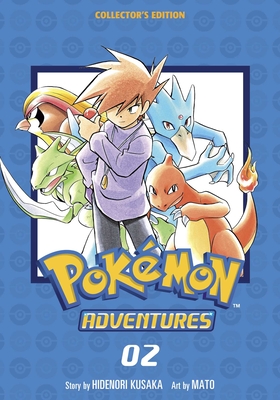 This is book number 2 in the Pokémon Adventures Collector’s Edition series.

When Pokémon Trainer Red goes missing, his faithful Pikachu teams up with Trainer Amarillo del Bosque Verde to find him. The quest will take smarts, skills and a lot of help from Red’s friends and other Pokémon. It will also pit Yellow and Pikachu against the Elite Four, whose headquarters on the mysterious Cerise Island will put all their battle tactics to the test!

Collects the original Pokémon Adventures volumes 4, 5 & 6!
Hidenori Kusaka is the writer for VIZ Media’s Pokémon Adventures. Running continuously for over 20 years, Pokémon Adventures is the only manga series to completely cover all the Pokémon games and has become one of the most popular series of all time. Kusaka is currently working on the 14th story arc, Pokémon: Sun & Moon. In addition to writing manga, he also edits children’s books and plans mixed-media projects for Shogakukan’s children’s magazines. He uses the Pokémon Electrode as his author portrait.