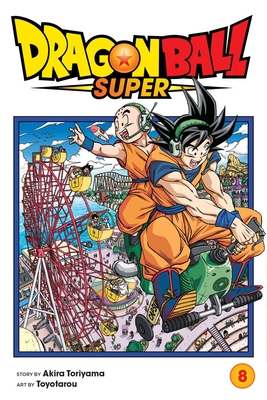 This is book number 8 in the Dragon Ball Super series.

The greatest warriors from across all of the universes are gathered at the Tournament of Power. Kale, a Saiyan from Universe 6, is on a rampage that’s leading to the erasure of one universe after another. Meanwhile, Goku and the five remaining fighters from Universe 7 are still intent on surviving the battle and saving everything and everyone they know!
Renowned worldwide for his playful, innovative storytelling and humorous, distinctive art style, Akira Toriyama burst onto the manga scene in 1980 with the wildly popular Dr. Slump. His hit series Dragon Ball (published in the U.S. as Dragon Ball and Dragon Ball Z) ran from 1984 to 1995 in Shueisha's Weekly Shonen Jump magazine. He is also known for his design work on video games such as Dragon Quest, Chrono Trigger, Tobal No. 1 and Blue Dragon. His recent manga works include COWA!, Kajika, Sand Land, Neko Majin, Jaco the Galactic Patrolman and a children's book, Toccio the Angel. He lives with his family in Japan.