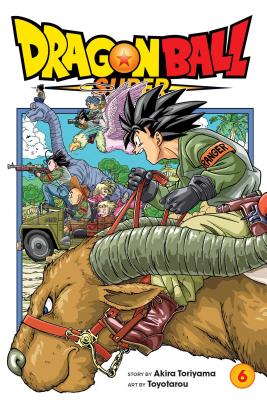 This is book number 6 in the Dragon Ball Super series.

The Lords of Everything are about to host the Tournament of Power! The Zen Exhibition Match between the Gods of Destruction comes to an end, and the rules for the main event are set. The penalty for the losing universes? Complete destruction. Which means Goku and friends had better pick Universe 7's ten mightiest warriors and win—no gods allowed!
Renowned worldwide for his playful, innovative storytelling and humorous, distinctive art style, Akira Toriyama burst onto the manga scene in 1980 with the wildly popular Dr. Slump. His hit series Dragon Ball (published in the U.S. as Dragon Ball and Dragon Ball Z) ran from 1984 to 1995 in Shueisha's Weekly Shonen Jump magazine. He is also known for his design work on video games such as Dragon Quest, Chrono Trigger, Tobal No. 1 and Blue Dragon. His recent manga works include COWA!, Kajika, Sand Land, Neko Majin, Jaco the Galactic Patrolman and a children's book, Toccio the Angel. He lives with his family in Japan.