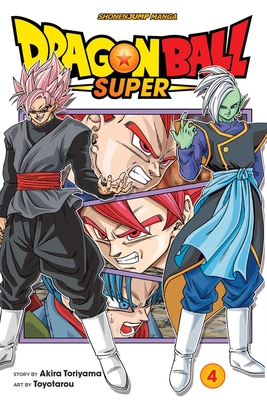 This is book number 4 in the Dragon Ball Super series.

Goku Black’s identity has been revealed as Zamas, the lord of lords from Universe 10! But he’s not alone—his counterpart from the parallel universe has teamed up with him and, thanks to the super Dragon Balls, they are nearly unstoppable! In the present, Goku trains with Master Roshi to perfect the Mafū-ba and seal Zamas away. Meanwhile, Kaiô-shin takes Lord Gowas, Zamas’s mentor, to the parallel universe to try and push his former pupil back to being good!
Renowned worldwide for his playful, innovative storytelling and humorous, distinctive art style, Akira Toriyama burst onto the manga scene in 1980 with the wildly popular Dr. Slump. His hit series Dragon Ball (published in the U.S. as Dragon Ball and Dragon Ball Z) ran from 1984 to 1995 in Shueisha's Weekly Shonen Jump magazine. He is also known for his design work on video games such as Dragon Quest, Chrono Trigger, Tobal No. 1 and Blue Dragon. His recent manga works include COWA!, Kajika, Sand Land, Neko Majin, Jaco the Galactic Patrolman and a children's book, Toccio the Angel. He lives with his family in Japan.