Tragic Consequences: The Price America is Paying for Rejecting God and How to Reclaim Our Culture for Christ (Hardcover) 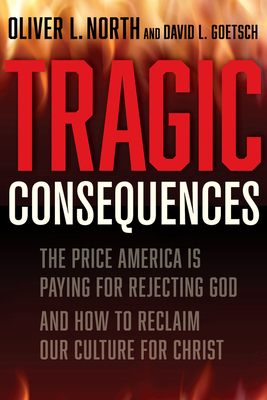 Tragic Consequences: The Price America is Paying for Rejecting God and How to Reclaim Our Culture for Christ (Hardcover)

By Oliver L. North, David Goetsch
List Price: $26.00
Our Price: $23.40
(Save: $2.60 10%)
Usually Ships in 1-5 Days
Tragic Consequences was written for Americans who are concerned about the cultural decline they see all around them, people who watch the nightly news and ask themselves, “What is happening to our country?” It seems we have become a nation of people who are offended by everything but sin. What is happening to our country is simple to explain but sad to observe: we are seeing what a culture of sin can do to a country. Within the problem is the solution. Biblical morality reestablished in America by an uprising of God’s people standing for righteousness will bring God’s forgiveness and our healing.
Oliver L. North is a combat decorated U.S. Marine, founder of a small business, and holder of three U.S. patents. For seventeen years he was a syndicated columnist and host of War Stories on FOX News Channel. North has authored nineteen best-selling books and is co-founder of Freedom Alliance. North says his greatest achievement is being “the God-fearing husband of one, father of four, and grandfather of eighteen.”

David Goetsch is a Marine Corps veteran and member of the Florida Veteran’s Hall of Fame (Class of 2016). Dr. Goetsch is a professor of business, Christian counselor, and author of seventy-six books. Several of his books are best-sellers that have been translated into various foreign languages.