The Nutmeg Trail: Recipes and Stories Along the Ancient Spice Routes (Hardcover) 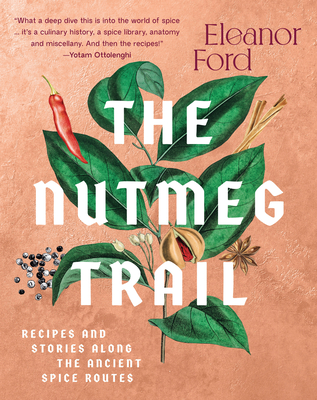 The Nutmeg Trail: Recipes and Stories Along the Ancient Spice Routes (Hardcover)


Usually Ships in 1-5 Days
*Winner of two Gourmand World Cookbook Awards*
"What a deep dive this is into the world of spice. . . . And then the recipes Recipes which allow the reader to travel from Asia to the Middle East along the spice route, taking in so much flavor and so much context on the way." --Yotam Ottolenghi
Through 80 spice-infused recipes, spectacular images, and a mouthwatering culinary journey along the ancient spice trail, award-winning author Eleanor Ford's luscious new volume reveals how centuries of spice trading and cultural diffusion changed the world's cuisine and how to best stock and enjoy spices in your own home.
From humankind's earliest travels, people have followed and sought out the spice routes. These maritime trading trails acted as the central nervous system of the world, enabling the flow of goods and ideas.
In this richly illustrated volume, Eleanor Ford uses recipes as maps as she takes readers on a culinary journey that weaves through history and around the world. She explores both the flavor profiles and the spread of spices--from cardamom to cinnamon, ginger to sumac--and provides fascinating insights such as how nutmeg unites the spice blends Indian garam masala, Lebanese seven spice, French quatre epices, Moroccan ras el hanout, and Middle Eastern baharat, lending its bittersweet, fragrant warmth to them all.
This unparalleled volume provides 80 flavorful recipes for entrees, appetizers, sides dishes, and more, enabling you to make a divine garlic clove vegetable curry, jasmine tea-smoked chicken, Indonesian seafood gulai, as well as staple spice pastes and mixtures to have on-hand. The result will enable you to stock up and to have a home kitchen rich in international flavor and fragrance.
Eleanor Ford is a food writer, recipe developer, and food stylist who has traveled to seventy-seven countries, collecting eclectic and evocative recipes for inspiration or to reproduce. Her book Fire Islands: Recipes from Indonesia (Apollo Publishers) won the Best International or Regional Cookbook award at the 2020 Guild of Food Writers Awards, and the Kerb Food and Drink Travel Book of the Year award at the 2020 Edward Stanford Travel Writing Awards. She is also the coauthor of the cookbook Samarkand: Recipes & Stories from Central Asia and the Caucasus, which was named a book of the year by The Guardian and Food52's Piglet Tournament of Cookbooks, and awarded a Food and Travel Prize by the Guild of Food Writers. Eleanor was also a recipe developer and editor for the Good Food Channel, BBC Food, and Good Food magazine; the local editor for Zagat's Hong Kong restaurant guide; a Zagat Buzz restaurant blogger in London; and a Time Out restaurant reviewer specializing in Asian and international foods. Eleanor lives in London, England.