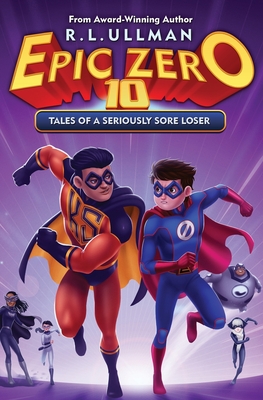 This is book number 10 in the Epic Zero series.

**Over 6,000 five-star series reviews on Amazon and Goodreads

They may be kids, but Elliott Harkness wants his superhero team to be taken seriously. So, when Next Gen gets their very own high-tech headquarters, Elliott thinks they've finally made it That is, until he discovers they're not even the best Meta kids around

First, Elliott meets Kid Supreme, a brash hero whose power is exceeded only by his ego. Then, a new tween superhero team called the Game Changers bursts onto the scene Led by the charismatic Harmony, they'll do whatever it takes to bring lasting world peace-including exterminating villains Elliott may disagree with Harmony's methods, but she quickly becomes a global superstar and recruits his friends to join her cause Frustrated and alone, Elliott enlists Kid Supreme to help him investigate Harmony's mysterious past. But when they uncover the shocking truth, is anyone willing to listen?

With the whole world blind to the danger in its midst, can Elliott become the epic hero he's always wanted to be-or will he always be just an Epic Zero?

Epic Zero 10 is the tenth book in the hilarious, action-packed series that will entertain kids 8-12, reluctant readers, and adults. Epic Zero 10 includes 16 illustrated character profiles and a full glossary of superpowers.