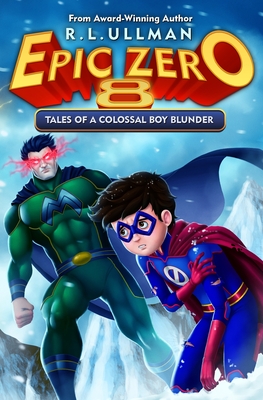 This is book number 8 in the Epic Zero series.

*Over 4,000 five-star series reviews on Amazon and Goodreads

Life couldn't be better for Elliott Harkness. Next Gen, his very own team of kid superheroes, is being coached by the Freedom Force, the greatest Meta team on the planet But unfortunately for Elliott, even the best coaching couldn't prepare him for what's come back from the past.

Before the Freedom Force, the Protectors of the Planet defended the globe from evil. They were the greatest Meta team of their time, until they were betrayed by one of their own leading to tragedy. In the aftermath, Meta-Man, the most powerful hero of them all, abandoned his adopted home of Earth and the Protectors disbanded. But now, decades later, an unstable Meta-Man has returned for revenge against his former teammates-and it's up to Elliott to stop him But who really betrayed the Protectors? And can Elliott find Meta-Man's archenemy in time to help defeat the former hero?

When the most powerful hero of all time has gone crazy, can Elliott become the epic hero he's always wanted to be--or will he always be just an Epic Zero?

Epic Zero 8 is the eighth book in the hilarious, action-packed series that will entertain kids, middle school students, and adults. Epic Zero 8 includes 16 illustrated character profiles and a full glossary of superpowers.