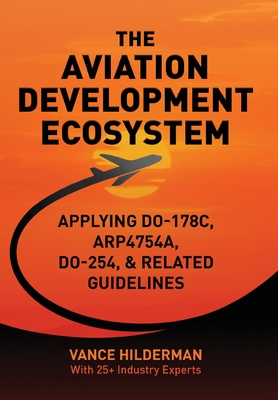 Until this book, aviation developers were frantically forced to search thousands of aviation standards for relevant information on aircraft, systems, software, and hardware development. Similar to designing a skyscraper by searching through a hardware store for parts, the results were chaotic and disconnected at best. But Today, aviation systems are increasingly integrated, complex, and inter-related; indeed, a new Ecosystem approach is required to succeed in aviation development. In his latest book Aviation Development Ecosystem, one of the world's foremost authorities on aviation development and certification clearly describes and explains in detail the true "Ecosystem" of aviation Safety, Systems, Hardware, and Software and "How To" apply the related standards and guidelines TOGETHER, including the following for aircraft, ground systems, eVTOL, rotorcraft, civil aviation, and military aircraft:

The author, Mr. Vance Hilderman, was the principal founder/CTO of three of the world's most significant aviation development/certification companies including TekSci, HighRely, and AFuzion. Hilderman has trained over 25,500 engineers in 700 aviation companies and 30 countries the above topics. His intellectual property is in use by 70% of the world's top 300 aviation and systems developers worldwide, and he has employed and personally presided over 500 of the world's foremost aviation engineers on 300+ projects the past thirty-five years. This book is the Capstone of his career and he readily provides the practical knowledge gained via tens of thousands of hours personally designing and certifying the aviation systems relied upon today for civil aircraft, military aircraft, UAV's, eVTOL, satellites, ground systems, and UAS's.