Unscrewing America: Hints and Hopes from the Heartland (Paperback) 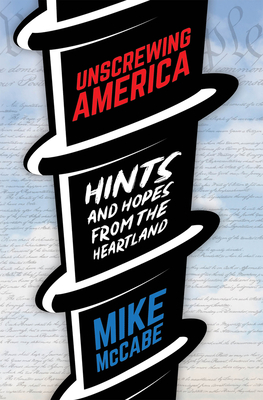 Unscrewing America: Hints and Hopes from the Heartland (Paperback)


Difficult to Find
Anyone puzzled by the state of the union had better carefully study places like Mike McCabe’s home state of Wisconsin. Clues to solving the riddle are hidden there. Unscrewing America explores how and why American politics has taken a turn toward madness, and describes how and why so many Americans have come to believe the nation’s best days are in the rear-view mirror. But the book doesn’t dwell on diagnosis. It emphasizes cure. Unscrewing America is part travelogue, part case study, part manifesto, part how-to guide. At the book’s core is the belief that the best solutions to what torments Americans today will not likely come from the one in a million who has achieved celebrity or is heroically triumphant, but rather from plain people who have suffered setback after setback, who have lost and learned. At a time when so there is so much talk about making or keeping America great, the country’s greatness hinges on our ability to remake ourselves. In a nation obsessed with winning, at a time when so many believe America’s future has never been cloudier and national decline seems more or less inevitable, our greatness will be determined by how we all cope with—and respond to—loss. The book’s author has lived across the rural-urban divide, with a foot in both worlds, having spent nearly half of his life out in the country and the rest in Wisconsin’s second-largest city and state capital. As a longshot candidate for governor, he journeyed over 100,000 miles in 11 months. The people and conditions encountered along the way bring into sharp focus how America is screwed, and what it will take to unscrew it. Academy Award-nominated documentary filmmakers Carl Deal and Tia Lessin call Mike McCabe a “ray of hope” who “describes in vivid detail how things got so fouled up” but also “offers a way out.”
Mike McCabe got his start in life on the farm milking cows and working the land with his family. He brings that farming background and a lifetime of experience in politics, journalism and nonprofit leadership to his writing. He is now executive director of Our Wisconsin Revolution and ran a spirited underdog campaign for governor of Wisconsin in 2018. Before that he started the grassroots group Blue Jean Nation. For 15 years Mike led the independent watchdog group Wisconsin Democracy Campaign. In that role, Mike blew the whistle on wrongdoing by elected officials and earned a reputation as one of the nation’s best political money trackers. Under his leadership, the Democracy Campaign was named the Citizen Openness Advocate of the Year in 2012 by the Society of Professional Journalists and Wisconsin Freedom of Information Council. In 2015 the University of Wisconsin-Madison School of Journalism honored him with its Distinguished Service Award. While leading Blue Jean Nation, Mike produced a radio commentary series that was among the Wisconsin Broadcasters Association’s 2016 Awards for Excellence winners for best editorial commentary in large market radio programming. He appeared in the documentary films Citizen Koch (2013) and Pay 2 Play: Democracy’s High Stakes (2014), and previously authored Blue Jeans in High Places: The Coming Makeover of American Politics, which is in its fourth printing. The Progressive magazine named it one of the best books of 2014.