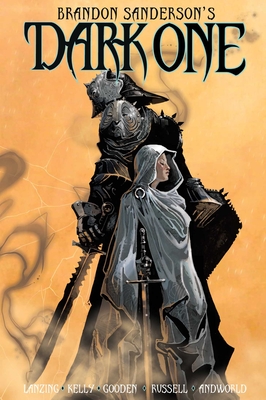 SOME WORLDS ARE MADE TO BE BROKEN.

Paul Tanasin is a young man haunted by visions of a dark and fantastic world—visions he initially believes are hallucinations. But when he discovers they are prophecies from Mirandus, a world in which he's destined to become a fearsome destroyer, he'll have to embrace the fear, rise up as the Dark One, and shatter everything. DARK ONE examines the dual roles we often take on in life-the ability to be a savior as well as a destroyer.
Jackson Lanzing is a creative professional with a wide-ranging skillset. By day, he's a creative director in brand marketing with an expertise in film & television. By night, he's a New York Times Bestselling writer of comics, digital series, film, television, and animation.

JACKSON LANZING, THE CREATIVE DIRECTOR has over a decade of experience in digital and audiovisual marketing. He started his career at Electronic Arts, where he handled day-to-day production and post for "Battlecast Primetime," an innovative hourlong e-sports series. He has since moved into film and television marketing as Creative Director at Jump! Creative, producing award-winning digital content and TV spots for Disney, Marvel Studios, Warner Brothers, Lionsgate, Fox, Sony Pictures, and more. While he oversees creative at Jump, he also still cuts his favorite spots himself.

An award-winning illustrator and sequential artist, Nathan C. Gooden is Art Director at Vault Comics. Nathan studied animation at the Pratt Institute in Brooklyn, and worked in film production, before co-founding Vault Comics. Nathan’s previous works include Brandon Sanderson’s Dark One (Vault), Barbaric (Vault), Zojaqan (Vault), and  Killbox (from American Gothic Press). He lives in Southern California, where he plays a lot of basketball and hikes constantly with his wife.

Kurt began working as a colorist in 2011 and teaching coloring in 2014 through YouTube and his online courses.

He lives in Long Beach, Mississippi, with his wife and two cats. When he is not coloring, he enjoys drawing, streaming, playing basketball, video games, movies, and coloring more.