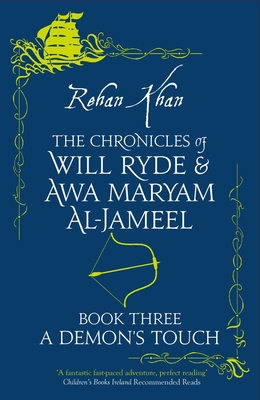 This is book number 3 in the The Chronicles of Will Ryde & Awa Maryam series.

Istanbul, 1593- returning from their previous mission with the death of their Commander weighing heavily upon them, there is no respite for the Ruzgär unit, as they are declared traitors to the Ottoman Empire and banished from the legendary Janissary order. Even the recovery of the fabled Armour of David, so prized by the Sultan is not enough to prevent this. Now, desperate and on the run, Will must turn to the sinister Earl of Rothminster as an unlikely protector. Meanwhile Awa and the remaining Ruzgär, outcasts as far as the authorities are concerned, are nevertheless called upon by their small band of supporters to protect the very people who have declared them enemies of the empire, as a mysterious force threatens to engulf the capital. All roads lead to Istanbul and all who traverse it, will be plagued by a demon’s touch...
Rehan Khan was born in London. An avid observer of history and the many cross-cultural connections it unearths, he has always been intrigued by how ideas and information move from one civilization to the next. A visiting professor at an international business school, Rehan is the author of A Tudor Turk, A King's Armour, Last of the Tasburai and Scream of the Tasburai. He lives in Dubai with his family.
"This is confident, perfectly paced storytelling, a rip-roaring adventure full of narrative surprises. The pace does not let up from page one, and by the conclusion readers young and old will be eager for more from Will and Awa!" —Peter Lerangis, author, The Sword Thief, on A Tudor Turk   "Three huzzahs for this scintillating new take on the late Tudor period: a rip-roaring, erudite, cosmopolitan pageturner peppered with the wisdom of ages and glowing with the ruby light of a compassionate heart—a jewel no snaggle-toothed Queen or vainglorious Sultan can buy." —Naomi Foyle, author, The Gaia Chronicles, on A Tudor Turk

"Khan’s adventure focuses on the Mediterranean region, when the Ottoman Empire, the Republic of Venice, Spain, Portugal and Morocco were jostling, seeking to hold or increase their trading power and influence. The sketching of this backdrop is accompanied by insights into the Arabic culture. . . . Will and Awa are a formidable team whose quests are as exciting as those of many protagonists of modern dystopian or spy novels for this age group. Fights, chases and conspiracy plots make this into a fast moving and exciting read. Khan does not take what could have been the obvious romantic route instead allowing Awa and Will to develop a true friendship based on their respective skills and qualities. . . . Khan’s writing is fluent, and the wealth of details enriches the plot without slowing its pace. . . . An insightful, fascinating and gripping story." —Armadillo magazine on A Tudor Turk

"Provides an interesting and broader than usual perspective on the world during the reign of Elizabeth 1; a time in which the English Queen seeks to make links with Sultan Murad, powerful ruler of the Ottoman Empire. Through this story and its cast of characters East meets West and rich meets poor providing windows into very different worlds and demonstrating, in particular through the two main characters, how trust, collaboration and a sense of shared purpose bring people together." —Book for Keeps on A Tudor Turk