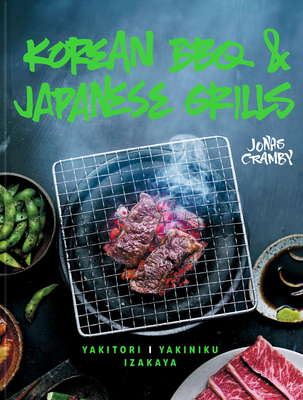 
Difficult to Find
In Korean BBQ & Japanese Grills Jonas Cramby explores recipes of Korean and Japanese barbecue - its techniques, philosophy and historical roots. He shares his favorite recipes which include, among others, yakitori, yakiniku and izakaya-style classics. He also outlines how to perfectly ferment kimchi, how to grill indoors without choking and how to chill a refreshing lager without it turning into ice.

Trimmings and sauces all take minutes to prepare and the meat seconds to barbecue. Jonas suggests grills that are simple, portable and so cheap that anyone can have a feast in the park, on the cook while talking, picking and
drinking for hours.

The art of Korean barbecue and Japanese grilling is not just a meal, it is a mindful practice. Produce and tools are carefully chosen and something so simple as a piece of chicken, a little salt and fire can, with practice and the right technique, be transformed into something sublime, and is as much about making the food as
eating it.

Chapters include: Yakitori (grilled chicken), Yakiniku (grilled meat), Korean BBQ and Izakaya.
Jonas Cramby is a journalist, food blogger and restaurant critic. His blog on the Swedish magazine Cafe has 20,000 unique readers every month. In 2009 he was awarded the title Chronicler of the Year by Sweden's magazines, and he has recently become the restaurant critic for Metro. He is the author of Tex-Mex From Scratch, Texas BBQ, The Ultimate Sandwich and Taco Loco.