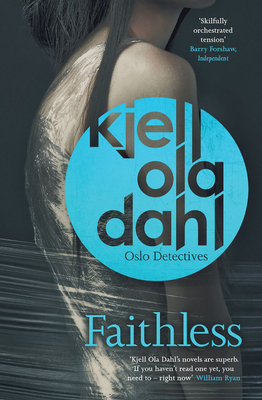 This is book number 5 in the Oslo Detective Series series.

The death of a woman whose body was found in an Oslo dumpster has eerie similarities to a cold case in northern Norway, prompting the Oslo Detectives to launch an investigation that soon becomes personal…


‘A masterclass in plotting, atmosphere and character that finely balances shocking twists with the coppers’ complicated personal lives’ The Times

'Dahl has an international reputation for skilfully plotted police procedurals that are drenched in the minutiae of detection. This is a fine example of his talent, featuring two of his most famous detectives … If you have never sampled Dahl, now is the time to try’ Daily Mail

When the body of a woman turns up in a dumpster, scalded and wrapped in plastic, Inspector Frank Frølich is shocked to discover that he knows her … and their recent meetings may hold the clue to her murder.

As he begins to learn more about the tragic events surrounding her death, Frølich’s colleague Gunnarstranda deals with a disturbingly similar cold case involving the murder of a young girl in northern Norway. An unsettling number of coincidences emerge, and Frølich is forced to look into his own past to find the answers … and to catch the killer before he strikes again.

Dark, brooding and utterly chilling, Faithless is a breath-taking and atmospheric page-turner that marks the return of an internationally renowned and award-winning series, from one of the fathers of Nordic Noir.

‘A chilling novel about betrayal, written in a hard-boiled style’ Sunday Times

‘Dark, stylish and suspenseful, Faithless is the perfect example of why Nordic Noir has become such a popular genre’ Reader’s Digest

‘If you want your worst fears about what goes on inside a cop's mind confirmed, meet Kjell Ola Dahl's Oslo sleuths, Gunnarstranda and Frølich … impossible to put down’ Guardian

‘I have read many clever and thrilling crime novels through my life, but often they have nothing to do with real life. If I don’t believe in them, they don’t impress me. But when Kjell Ola Dahl tells his stories, I believe every single word’ Karin Fossum

‘Fans of procedurals … will snap this one up’ Kirkus Reviews

‘Kjell Ola Dahl’s novels are superb. If you haven’t read one yet, you need to – right now’ William Ryan
One of the fathers of the Nordic Noir genre, Kjell Ola Dahl was born in 1958 in Gjøvik. He made his debut in 1993, and has since published eleven novels, the most prominent of which is a series of police procedurals cum psychological thrillers (Oslo Detectives series) featuring investigators Gunnarstranda and Frølich. In 2000 he won the Riverton Prize for The Last Fix and he won both the prestigious Brage and Riverton Prizes for The Courier in 2015. His work has been published in 14 countries, and he lives in Oslo.
“Recommend to fans of Karin Fossum and Kjell Eriksson. Dahl is a formidable talent whose books may well become as popular in the US as in Norway.” ―Booklist on The Fourth Man

“What comes shining through in this book, and very nicely so, is the old cliché that the world is a very small place, and that it really is impossible to escape one's own history.” —Crime Segments

“[T]he characters carry a force of will that makes it a pleasure to follow their investigations . . . I’ll be watching for more of Dahl’s work.” —Kingdom Books, Mysteries - Reviews