The Witches' Almanac 50 Year Anniversary Edition: An Anthology of Half a Century of Collected Magical Lore (Paperback) 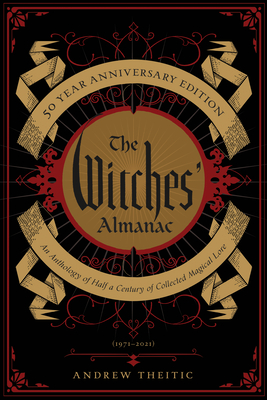 The Witches' Almanac 50 Year Anniversary Edition: An Anthology of Half a Century of Collected Magical Lore (Paperback)

By Theitic
List Price: $15.95
Our Price: $14.36
(Save: $1.60 10%)
Usually Ships in 1-5 Days
Elizabeth Pepper founded The Witches’ Almanac in 1971 as a means to provide a source of good information to the quickly growing magical communities in the United States and Canada. Elizabeth, whose own Basque witchcraft tradition was rich in lore and myth, knew that witchcraft was at a crossroads that the paltry amounts of literature needed remedy. The community immediately embraced The Witches’ Almanac’s wit, conversant, and sophisticated style, with it appealing to general readers as well as hard-core Wiccans. Andrew Theitic—Elizabeth’s literary heir, as well as a prominent member of the New England community—has continued, as well as expanded, the mission of The Witches’ Almanac’s. For both of the publishers The Witches’ Almanac’s has been a labor of love.

The Witches’ Almanac 50 Year Anniversary Edition is an anthology of articles spanning the five decades that the almanac has been published. The table of contents is inclusive of several articles for each of the years that the almanac has been published. The reader will find material that has been drawn from numerous world cultures, spanning a variety of age groups. The spells, myth, folklore, and mystical poetry present the reader with new and classic perspectives that are timeless. This is the first time such an expansive collection of articles about witchcraft, magic, herbalism, charms, spells, and related topics is being presented in a single volume, and it will surely be treasured as occult memorabilia immediately upon its release.

Theitic is a prominent member of the New England pagan community. He became editor/publisher of The Witches’ Almanac Ltd. upon the death of founder Elizabeth Pepper in 2005. He lives in Rhode Island.