Mutual Aid: Building Solidarity During This Crisis (and the Next) (Paperback) 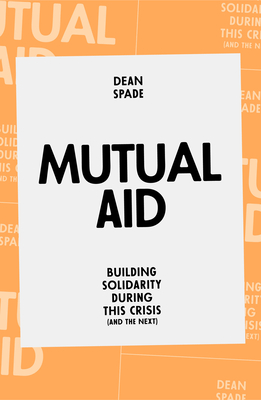 Mutual Aid: Building Solidarity During This Crisis (and the Next) (Paperback)


Usually Ships in 1-5 Days
Mutual aid is the radical act of caring for each other while working to change the world.

Around the globe, people are faced with a spiralling succession of crises, from the Covid-19 pandemic and climate change-induced fires, floods, and storms to the ongoing horrors of mass incarceration, racist policing, brutal immigration enforcement, endemic gender violence, and severe wealth inequality. As governments fail to respond to—or actively engineer—each crisis, ordinary people are finding bold and innovative ways to share resources and support the vulnerable.

This book is about mutual aid: why it is so important, what it looks like, and how to do it. It provides a grassroots theory of mutual aid, describes how mutual aid is a crucial part of powerful movements for social justice, and offers concrete tools for organizing, such as how to work in groups, how to foster a collective decision-making process, how to prevent and address conflict, and how to deal with burnout.

Writing for those new to activism as well as those who have been in social movements for a long time, Dean Spade draws on years of organizing to offer a radical vision of community mobilization, social transformation, compassionate activism, and solidarity.
Dean Spade is an Associate Professor at Seattle University School of Law, where he teaches courses on policing, imprisonment, gender, race, and social movements. Dean has spent over two decades working in social movements working to end prisons, borders, poverty, and war and support people trying to survive right now. In 2002, Dean founded the Sylvia Rivera Law Project, a non-profit law collective that provides free legal services to transgender, intersex and gender non-conforming people who are low-income and/or people of color, and which operates on a collective governance model. Alongside his book Normal Life: Administrative Violence, Critical Trans Politics, and the Limits of the Law, Dean's writing has appeared in The Chronicle of Higher Education, Out, In These Times, Social Text, and Signs.

“We need this book right now! This reads like a how-to manual for modern and future interdependence. Dean walks us through what mutual aid is, best practices, pitfalls, and helps us tap into the wisdom and potential of this strategy for surviving the crises we can anticipate and those that will surprise us. Read this and move from a scarcity/charity mindset to one of abundant solidarity!”
—adrienne maree brown, author of Pleasure Activism

“I cheered after I read this book. Finally, we have an accessible mutual aid primer to ground our work in this current challenging yet invigorating moment. I’m giving copies of this book to everyone I know. You should too.”
—Mariame Kaba, founder and director of Project NIA

“Peter Kropotkin called mutual aid a ‘factor in evolution.’ The Black Panther Party called it ‘survival pending revolution.’ Dean Spade tells us that mutual aid is fundamental to making revolution. It is about building solidarity, preparing for battle, and creating a culture of collective care to displace the atomizing culture of individualism and the market. An indispensable guide for our moment, this book teaches us that effective social movements are impossible without mutual aid. Read every page. Carry it everywhere. Share it with everyone. Change everything.”
—Robin D. G. Kelley, author of Freedom Dreams: The Black Radical Imagination

“[Mutual Aid] provides a useful framework of the meaning of mutual aid while explaining how it is an essential component to social transformation and solidarity movements.”
—Hannah May-Powers, Tulane Hullabaloo

“Deftly exploring the grassroots theory of mutual aid and its role in social justice movements, Spade critiques the existing systems and the need to ‘fix’ people who are in need, as well offering actionable advice for activists.”
—Eve Upton-Clark, The Progressive

“[Mutual Aid is] at once a call-to-arms, a balm for all those despairing at the present and future, and a blueprint for how we might better live with one another.”
—Daniel Fernandez, The Nation

“[Mutual Aid] can be read as a manual for people already doing mutual aid work, but it will also be of interest to people [who] don’t identify as activists but are questioning that identity amid the chaos and pain of the pandemic, continued police brutality, polarization, and climate chaos.”
—Alisa Bohling, Lit Hub

“Mariame Kaba said she ‘cheered after I read this book,’ and other readers may join in her enthusiasm for its helpful guidance and useful framework for our mutual aid projects.”
—Renée Feltz, Indypendent

“[Spade’s] book sees mutual aid emerging from the margins and presents it as a way of imagining and creating a post-capitalist society. [His] ambition is to promote mutual aid as a pathway to this society: ‘To imagine a society where we share everything, co-govern everything, have everything we need and don’t rely on coercion and domination.’”
—Derek Wall, Ebb Magazine

“Spade outlines how the systems we currently have in place are not set up to meet people’s needs—as we’ve seen highlighted by last year’s major global disruption.”
—Maria Ricapito, Marie Claire

“Spade’s book argues for the power of mutual aid to remake social relations based on solidarity, break stigmas around interdependency, and build social movements … Mutual Aid stresses the autonomous, localized aspects of community organizing and resists the power structures that come with the professionalization and centralization of radical care work—whether at the hands of government, nonprofits, or the capitalist class.”
—Kaegan Sparks, Artforum

“Mutual Aid is not an appeal to people with power to give it up, step aside, or make room.Instead, it addresses people building power together to achieve their goals.”
—Amy Wickner, College & Research Libraries

“Mutual Aid is not only a guidebook for surviving current and future social crises; it offers a means by which social life may be radically transformed toward widespread social equity, cohesion, dignity, and belonging.”
—Paul Centorame, Lateral