Earth Magnetism: Problems with Electric Charges, on Earth, in Atmosphere, in Van Allen Belt and on the Moon (Paperback) 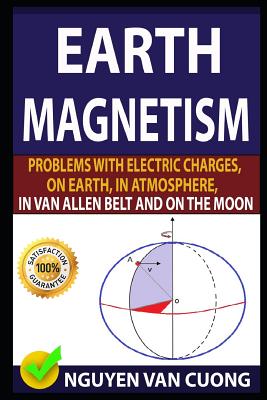 Earth Magnetism: Problems with Electric Charges, on Earth, in Atmosphere, in Van Allen Belt and on the Moon (Paperback)


Usually Ships in 1-5 Days
Hurry up and get YOUR copy NOW❗
Discovering Secrets about EARTH MAGNETISM: Problems With Electric Charges, On Earth, In Atmosphere, In Van Allen Belt And On The Moon❗

I study and compile my research results in a book. My purpose is to offer my book for publishing in Singapore and distributing to the world.

The book is sorted as Earth Basic Science; semi-empirical research, its title is "Problems With Electric Charges, On Earth, In Atmosphere, In Van Allen Belt And On The Moon."

Should we begin with "the spinning & magnetism"?

This question has been asked for long ago but known to the world since 1915 when Samual J.Barnet (an American scientist) introduced his invent: the Barnet effect. The effect is stated in general: any neutral object (no electric charge on it) spins to induce magnetism.

That scientist, the author of his invent applied such theory to explain the origin of Earth Magnetism. He failed or is not accepted.

Certainly we are at a large gap away from Samual J. Barnet. The gap is not just 102-year interim; it is a view to magnetism in general and Earth Magnetism in my research. The gap is presented in this book with several chapters in 200 pages.

I am neither going to deny the settled theories about E.M nor to make the Geomagnetism up-side-down, but consider the E.M as one constituted by 2 major parts:

- The "part I" for sea & land: This mainly comprises 2 compositions that induced by the charges at sea surface and land surface, they are both on Earth.

The very special paradox is that "land charges versus sea surface charge in contributing to the E.M whilst they both are moving together with Earth's rotation."

- The other-external inducers: is one that contributed by external magnetic inducers such as Van Allen belt, Moon and atmosphere. The simple principle governing this part is that the Earth is rotating in electric fields of many charges; that's how the Earth is magnetized. Meantime, in this part I point out that the Moon is charged and its charge induces magnetism to the Earth during orbiting around our planet in a cycle of 29.5 x 24 hrs.

Like any other authors, I wish my book to be printed and sold. Unlike some other author, my book is my claim about my discovery.

Thank you for your kind attention,

Don't delay any more seconds, scroll back up, DOWNLOAD your copy NOW for only $2.99 and start the journey of mastering essential legal terms explained about EARTH MAGNETISM TODAY