Toward the Cross: Heart-Shaping Lessons for Lent and Easter (Paperback) 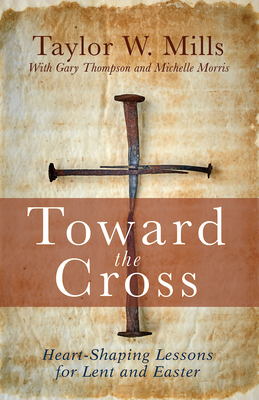 Toward the Cross: Heart-Shaping Lessons for Lent and Easter (Paperback)


Usually Ships in 1-5 Days
Let Jesus, not the world, set the priorities of your heart in this Lenten season. Toward the Cross challenges each of us to answer the question that lies at the heart of discipleship, at the heart of our priorities: Is following Jesus the most important thing to you? Is it your priority? When you follow Jesus, how does it change the way you think, speak, and act? Jesus told would-be followers to count the cost. The chapters and daily readings in this book help you do that by developing a disciple's perspective on yourself, others, and things. They encourage you to let go of the past, guilt, and things that weigh you down and cling tightly to Christ in genuine discipleship. This seven-week study guides you through Lent and Easter, helping you explore qualities and characteristics of Christian discipleship that lead you to claim Jesus as your highest priority. Each week includes a group session based on the traditional Gospel texts with supporting daily readings for Ash Wednesday through Easter Monday. Group Sessions have questions to spark discussion as you strengthen your commitment to making Jesus your priority during the Lenten season, Easter, and beyond.
Taylor W. Mills (Author) Taylor W. Mills has been the pastor of United Methodist churches in Williamston, Raleigh, and Durham, North Carolina. He recently became the pastor of Ann Street United Methodist Church in Beaufort, North Carolina. His wife has worked in the school system, and neither she nor their two daughters share Taylor's taste for Led Zeppelin music. taylorwmills.com Gary Thompson (Author) Gary Thompson is a retired ordained elder in the Mississippi Annual Conference of The United Methodist Church. Gary received his undergraduate degree from Delta State University in Cleveland, Mississippi, and an MRE from Southern Seminary in Louisville, Kentucky. He did additional study at New Orleans Seminary and Memphis Theological Seminary. He earned a DMin in leadership development from Princeton Theological Seminary. Gary enjoys traveling domestically and internationally. He is most proud of his wife, Robin; three children; and seven grandchildren. You can e-mail Gary at drgaryt@gmail.com, follow him on Twitter at @drgaryt, or read his blog at transformativechurch. blogspot.com. Michelle J. Morris (Author) Michelle Morris is associate pastor of First United Methodist Church, Conway, Arkansas. Previously she was Lead Equipper for the United Methodist Arkansas Conference Center for Vitality, as well as serving as pastor to United Methodist churches in West Memphis and Fort Smith. She has a B.A. in English and French and an M.A. in Comparative Literature from the University of Arkansas. She graduated with her M.Div. from Perkins School of Theology in 2009 and her Ph.D. from the Graduate Program in Religious Studies at Southern Methodist University in 2014. She also graduated with a certificate in Women's and Gender Studies. Her dissertation examined the subject of infertility in the New Testament. She was a contributor to the CEB Womens Bible, and she periodically writes for the Adult Bible Studies Curriculum for Abingdon/Cokesbury. Michelle and her husband, Travis, have a son, Soren (not named for Kierkegaard).