The Majesty of Calmness: Individual Problems and Possibilities - Failure as Success, and the Perils of Hurry (Paperback) 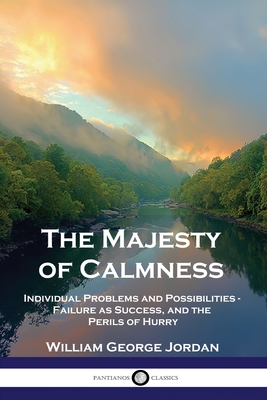 The Majesty of Calmness: Individual Problems and Possibilities - Failure as Success, and the Perils of Hurry (Paperback)

The Majesty of Calmness is one of William George Jordan's best-regarded self-help books; it discusses success as often being the result of past failures, and how haste in life and work is a scourge to be avoided.

Working as a literary editor in New York City in the late 19th and early 20th centuries, Jordan had ample experience of the bustling, non-stop urban lifestyle. Having a firm mental constitution to deal with the daily stresses and challenges of the concrete jungle is something which Jordan realized was all too essential; many who fall short do so not because of a lack of talent or luck, but overlooking the mental and psychological elements of weathering and succeeding in the world.

With this in mind, Jordan sets out a series of topics and useful advice, with the final aim being attainment of happiness and a sense of accomplishment. The majesty of calmness - a serene mood that lets us consider the problems and possibilities before us - is contrasted to hurry, the hasty state that causes us to miss important details and subtleties. Since it first appeared in 1900, this book has been popular and much-consulted, its legacy being to successfully start many readers on the path to mental fortitude and a great mindset.