The Baltimore Catechism: The Doctrines of the Catholic Church - Lessons on God, His Commandments, Christ, Sin, Confession and Prayer - the 1891 (Paperback) 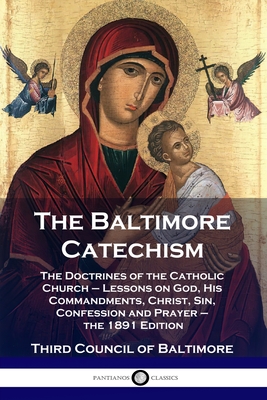 The Baltimore Catechism: The Doctrines of the Catholic Church - Lessons on God, His Commandments, Christ, Sin, Confession and Prayer - the 1891 (Paperback)

By Third Council of Baltimore

The Baltimore Catechism was the official book of Catholic doctrine and instruction for children in the United States - it consists of many lessons about God, the sacraments, and Jesus.

An all-encompassing summary of the Catholic faith, The Baltimore Catechism explains what the principles and beliefs of Catholicism are. Each chapter consists of a series of questions and answers; beginning with the simple topic, gradually the questions grow more detailed and insightful. By the end of each chapter, the reader is intended to fully grasp the topic at hand, whether it be about the life and example of Jesus, or the functions of the church in society. The first part is intended for young children up to the fifth grade, the second is aimed at those from the sixth to the ninth grade, while the final, most detailed part is for those in high school.

The idea of an official, Catholic book that explains the faith for young readers was conceived in the early 19th century. Bishops of the church determined that a single, complete text be distributed to church educators for use in Sunday schools and to parochial institutions. Divergences in the text throughout the 20th century made the catechism less popular, as schools established their own curricula. This edition of The Baltimore Catechism replicates the 1891 text, so that readers may receive an accurate impression of what the original book was intended to answer.