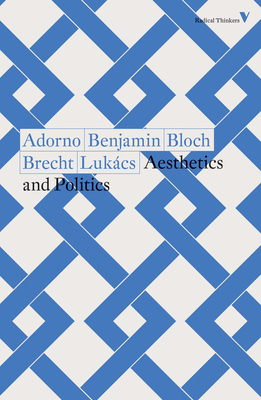 By Theodor Adorno, Walter Benjamin, Ernst Bloch, Bertolt Brecht, Georg Lukacs
List Price: $17.95
Our Price: $16.16
(Save: $1.80 10%)
Usually Ships in 1-5 Days
An intense and lively debate on literature and art between thinkers who became some of the great figures of twentieth-century philosophy and literature.

With an afterword by Fredric Jameson

No other country and no other period has produced a tradition of major aesthetic debate to compare with that which unfolded in German culture from the 1930s to the 1950s. In Aesthetics and Politics the key texts of the great Marxist controversies over literature and art during these years are assembled in a single volume. They do not form a disparate collection but a continuous, interlinked debate between thinkers who have become giants of twentieth-century intellectual history.
Theodor Adorno was director of the Institute for Social Research at the University of Frankfurt from 1956 until his death in 1969. His works include In Search of Wagner; Aesthetic Theory; Negative Dialectics; and (with Max Horkheimer) Dialectic of Enlightenment and Towards a New Manifesto.

Walter Benjamin was a German-Jewish Marxist literary critic, essayist, translator, and philosopher. He was at times associated with the Frankfurt School of critical theory and is the author of Illuminations, The Arcades Project, and The Origin of German Tragic Drama.

Ernst Bloch (1885–1977) is one of the most important German Marxist thinkers of the 20th century and one of the great theorists of utopia. A friend of Walter Benjamin, Bertolt Brecht and Theodor Adorno, his works include The Principle of Hope, Spirit of Utopia and Traces.

Bertolt Brecht (1898–1956) was a German poet, playwright, and theater director. An influential theater practitioner of the 20th century, Brecht made equally significant contributions to dramaturgy and theatrical production, the latter particularly through the seismic impact of the tours undertaken by the Berliner Ensemble—the post-war theater company operated by Brecht and his wife and long-time collaborator, the actress Helene Weigel—with its internationally acclaimed productions.

Georg Lukács (1885–1971) was a Hungarian Marxist philosopher and literary critic. Most scholars consider him to be the founder of the tradition of Western Marxism. He contributed the ideas of reification and class consciousness to Marxist philosophy and theory, and his literary criticism was influential in thinking about realism and about the novel as a literary genre. He served briefly as Hungary&rsquo;s Minister of Culture following the 1956 Hungarian Revolution.

Fredric Jameson is Distinguished Professor of Comparative Literature at Duke University. The author of numerous books, he has over the last three decades developed a richly nuanced vision of Western culture&rsquo;s relation to political economy. He was a recipient of the 2008 Holberg International Memorial Prize. He is the author of many books, including Postmodernism, Or, The Cultural Logic of Late Capitalism, The Cultural Turn, A Singular Modernity, The Modernist Papers, Archaeologies of the Future, Brecht and Method, Ideologies of Theory, Valences of the Dialectic, The Hegel Variations and Representing Capital.

"This is vital reading for anyone concerned with the relationship between art and socialism." —John Fowles, Philosophy

"They are key texts in the study of modernism, of expressionist drama and of realism, and of many closely related general questions ... It is genuinely an indispensable volume."—Raymond Williams

"A volume of Adorno is equivalent to a whole shelf of books on literature."
– Susan Sontag