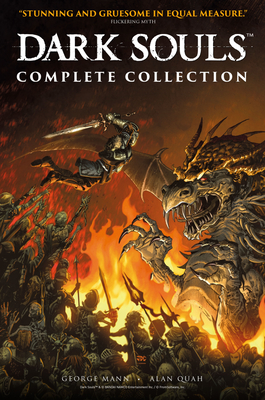 
Usually Ships in 1-5 Days
Ten years after Dark Souls was first released on the PlayStation, comes the ultimate collection of the comic series inspired by one of the most influential games of the 21st century!

Step back into the Kingdom of Lordan ten years after its first appearance in Dark Souls and immerse yourself in the complete collection of Titan Comics' graphic novel series. All five Dark Souls graphic novels have been bound in one spine for the first time ever in this anniversary edition! Now featuring the Age of the Fire - the comic prequel to the game - and the Legends of the Flame and Tales of Ember anthologies. Dark Souls: The Complete Collection is packed from cover to cover with rich artwork from rising star Alan Quah and more!

Collects Dark Souls: The Breath of Andolus, Dark Souls: Winter's Spite, Dark Souls: Legends of the Flame, Dark Souls: Tales of Ember and Dark Souls: The Age of Fire!
George Mann is a New York Times bestselling British author, primarily in genre fiction. He is the author of The Affinity Bridge, Newbury and Hobbs, and Ghosts of Manhattan, as well as numerous short stories, novellas and an original Doctor Who audiobook. His comic work includes Doctor Who: The Eighth Doctor from Titan Comics.

Alan Quah an artist from Malaysia whose first comics pages were published in a 1984 fanzine, APAzine from Berita Publishing. He has worked on The Vampire Diaries and Godzilla: Awakening, a prequel comic to the 2019 blockbuster Godzilla and RAGE, a french comic book series. He has also worked on Nike's Footwear Illustrations, Space Goat Presents Anthology, ShadowGirls, Evil Dead 2, and Orphan Black.