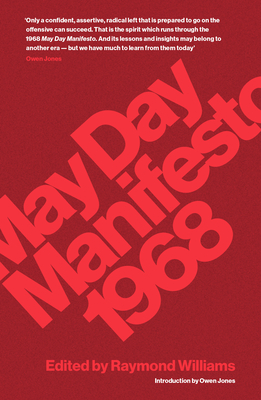 
Difficult to Find
Anniversary edition of the classic political manifesto

Urgently relevant to current arguments about the crisis of austerity, the 1968 manifesto set out a new agenda for socialist Britain, after the failure of the postwar consensus. It sought to change the nature of the state, to drive a wedge between finance and empire, to stress the importance of a planned economy for all, and to detach Britain from the imperial goals to which it had long been committed. Today, the spirit of The May Day Manifesto offers a road map to a brighter future.

The original publication brought together the most influential radical voices of the era. Among the seventy signatories were Raymond Williams, E. P. Thompson, Stuart Hall, Iris Murdoch, Terry Eagleton, Ralph Miliband, and R. D. Laing. This edition comes with an introduction from Owen Jones, who brings a sense of urgency and hope to the contemporary debate.

Raymond Williams (1921–1988) was for many years Professor of Drama at the University of Cambridge. Among his many books are Culture and Society, Culture and Materialism, Politics and Letters, Problems in Materialism and Culture, and several novels.

Owen Jones is a writer, commentator and activist. He writes frequently for the Guardian, Independent and New Statesman, and has worked in Parliament as a trade union lobbyist and parliamentary researcher, helping Labour plan backbench rebellions on issues ranging from civil liberties to workers’ rights. He lives in London.

“A genuinely collaborative project among a range of leftwing intellectuals of the day.”
—Terry Eagleton

“Only a confident, assertive, radical left that is prepared to go on the offensive can succeed. That is the spirit which runs through the 1968 May Day Manifesto. And its lessons and insights may belong to another era—but we have much to learn from them today.”
—Owen Jones

“The Manifesto sought to rescue and renew the idea that the purpose of the politics of the left—Labour and beyond—should be to further the long-term transformation of capitalist society in a democratic and egalitarian direction.”
—Michael Rustin, Guardian

“Reading Manifesto in 2018, it’s remarkable how methodical and far-reaching its analysis still appears, just as the problems it presents—and the answers it proposes—are still nowhere near being resolved today.”
—J.J. Charlesworth, ArtReview

“Explores the crisis of austerity, the burden of empire and the failures to control rampant capitalism, but … clears the path to a brighter and equal future”
—Cent Magazine

“A timely reprint … the scope of the document is impressive and the new edition will serve as a useful introduction to the politics of the New Left for contemporary readers.”
—Liam Cooper, vice-chair Dulwich and West Norwood CLPLabour Briefing