World Atlas of Beer: The Essential Guide to the Beers of the World (Hardcover) 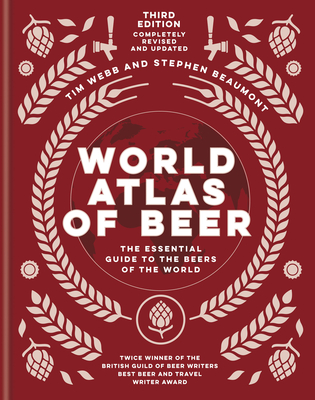 World Atlas of Beer: The Essential Guide to the Beers of the World (Hardcover)

By Tim Webb, Stephen Beaumont
List Price: $39.99
Our Price: $35.99
(Save: $4.00 10%)
Usually Ships in 1-5 Days
The definitive guide to world beer fully updated for a third edition
As craft brewing continues to go from strength to strength across the world, World Atlas of Beer is the definitive and essential guide to beer. Understand the rich, multi-faceted traditions of Belgium, the Nordic legend that is Finnish Sahti, the relatively new phenomenon of the New England hazy IPA, and why Australia's lower-strength beers are one of its great successes. With thousands of breweries now operating around the globe, and more opening every day, this is the expert guide to what is really worth drinking.
Country by country the book considers a vast range of brewing techniques, beer styles and traditions. Detailed maps describe crucial trends in major territories and features such as matching beer with food and how to pour different kinds of beer complete the picture.
Now in a fully updated third edition, this book is the perfect companion to help you explore the best beers the world has to offer.
Praise for the second edition of World Atlas of Beer:'Written with authority and wit... the perfect guide to the rapidly changing beer scene' - the Guardian
Tim Webb began writing about better types of beer when most of what could be said had to be reported in the past tense. During six years on the board of the Campaign for Real Ale (CAMRA) he ran Britain's national beer festival and co-founded CAMRA's publishing company. He has written Good Beer GuideBelgium continuously since 1992 and has won awards for beer writing in four countries. In a career spanning over 40 years he has witnessed and chronicled the return of the craft of beer brewing, perhaps the most extraordinary consumer-led revolution of modern times. Stephen Beaumont is recognized internationally as one of the leading writers on beer in the world today. He is the author or co-author of ten additional books about beer, including The Beer & Food Companion, and two editions of The Pocket Beer Book, and a contributor to many others. Through his 26 years of covering the global beer scene, Stephen has written literally hundreds of articles and columns for publications as diverse as Whisky Advocate, Playboy and the Celebrator, and hosted tastings, dinners and educational events around the globe, from Mexico City to Burton-on-Trent and Philadelphia to Beijing. He may be found online at beaumontdrinks.com and on Twitter at @BeaumontDrinks. When not travelling, he lives with his wife in Toronto, Canada.