Nova Scotia and the Great Influenza Pandemic, 1918-1920: A Remembrance of the Dead and an Archive for the Living (Paperback) 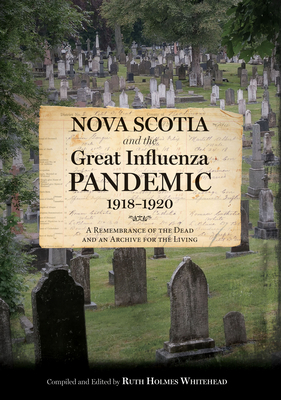 Nova Scotia and the Great Influenza Pandemic, 1918-1920: A Remembrance of the Dead and an Archive for the Living (Paperback)

The definitive academic resource on the Great Influenza by the celebrated historian behind Black Loyalists in time for the pandemic's centenary.

It could kill in as little as ten hours. Extremely high fever, bleeding from eyes, nose, and ears, terrible pain, especially in the head and the joints, delirium--and then its victims literally drowned in their own fluids. Fifty to 100 million people worldwide died in this global pandemic in the early twentieth century.

The heart of this book, however, is its human element. Oral histories, family memoirs, newspaper articles, and provincial death records tell, county by county, stories of those who died. Accompanied by 20 photographs, Nova Scotia and the Great Influenza Pandemic, 1918-1920 chronicles both provincial and personal efforts to cope during this most perilous time.

Ruth Holmes Whitehead has worked since 1972 for the Nova Scotia Museum, since 2003 as a Curator Emerita and Research Associate. She has authored or co-authored twenty books, including Stories from the Six Worlds, The Old Man Told Us, Black Loyalists, and Ancestral Images. In 1995, she was awarded a Doctorate of Laws, honoris causa, by St. Francis Xavier University. In 2014, Dr. Whitehead was inducted into the Order of Nova Scotia. She lives in Halifax.