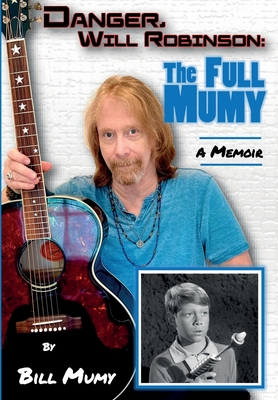 
Usually Ships in 1-5 Days
In his candid and entertaining memoir Danger, Will Robinson: The Full Mumy, Bill Mumy shares the personal stories and memories of his journey as an actor, musician, author, artist, and family man. Stepping into the limelight at the wise old age of four and never turning back, Bill has worked and connected with a veritable Who's Who, of both Hollywood and the Laurel Canyon music scene, and has the tales to tell - and tell he does. Like reminiscing with an old friend, the stories flow freely and dance back and forth between the decades, vividly painting a picture of some of our favorite pop culture icons: from Walt Disney, Jimmy Stewart, Lucille Ball, Brigitte Bardot, Alfred Hitchcock, Steve McQueen, Cloris Leachman, Dustin Hoffman, Bob Hope, Elizabeth Montgomery, Rosemary Clooney, Debbie Reynolds, Shirley Jones, George Clooney, Carrie Fisher, and Mark Hamill to the casts of Lost in Space and Babylon 5, to James Taylor, Brian Wilson, America, John Stewart, Harry Nilsson, Carole King, The Monkees, David Cassidy, Steve Lukather, Shaun Cassidy, "Weird Al" Yankovic, and Ringo Starr, the list (and the stories) go on and on. Loaded with photos from his personal archive Danger, Will Robinson: The Full Mumy is a fascinating peek behind the curtain into the reality of a child star who has led a "Real Good Life."