The Devil and the Dark Water (Paperback) 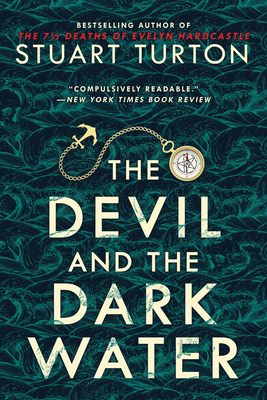 The Devil and the Dark Water (Paperback)

From Stuart Turton, author of The 7 1/2 Deaths of Evelyn Hardcastle, comes an extraordinary new locked-room mystery.

A murder on the high seas. A remarkable detective duo. A demon who may or may not exist.

It's 1634, and Samuel Pipps, the world's greatest detective, is being transported to Amsterdam to be executed for a crime he may, or may not, have committed. Traveling with him is his loyal bodyguard, Arent Hayes, who is determined to prove his friend innocent. Among the other guests is Sara Wessel, a noblewoman with a secret.

But no sooner is their ship out to sea than devilry begins to blight the voyage. A strange symbol appears on the sail. A dead leper stalks the decks. Livestock dies in the night.

And then the passengers hear a terrible voice, whispering to them in the darkness, promising three unholy miracles, followed by a slaughter. First an impossible pursuit. Second an impossible theft. And third an impossible murder.

Could a demon be responsible for their misfortunes?

With Pipps imprisoned, only Arent and Sara can solve a mystery that stretches back into their past and now threatens to sink the ship, killing everybody on board.

STUART TURTON is a freelance journalist who lives in West London with his wife. Stuart is not to be trusted—in the nicest possible way. The 7½ Deaths of Evelyn Hardcastle is his first novel.

Named a Best Book of 2020 by The Guardian, Daily Mail, Financial Times, The Independent, Publishers Weekly, and more.

"Compulsively readable...perfect for readers who like a little occult with their mystery." — The New York Times

"Artfully combines intriguing characters, fascinating historical details and a seafaring labyrinth of twists and turns-not to mention a demon named Old Tom...History and mystery lovers alike will delight in the heart-racing escapades of The Devil and the Dark Water." — BookPage, STARRED Review

"A successful novel that will be welcome in all fiction/mystery collections." — Library Journal, STARRED Review

"If you read one book this year, make sure it's this one." — Daily Mail

"And unlike most whodunits I wouldn't recommend it for pre-lights-out reading, not just because of the spooky bits, but because such a lovingly complex construct needs readers who are fully awake." — The Sunday Telegraph

"Brilliant... intoxicating... There are some great villains and terrific heroes, especially the gentle (and gory) giant Hayes. The Devil and the Dark Water overflows with wonderful descriptions, neat similes, and enough horror, mystery, and crime to keep anyone enthralled." — The Independent

"The locked room murder meets a Michael Bay movie, by way of Treasure Island; you can't know what's going on, if only because the author won't let you know until he's delivered the final surprise - and another one after that. The effect is irresistible." — The Guardian

"A genre sampling epic that sets outrageous traps for the reader and builds an atmosphere of dread up to an operatic final twist." — Financial Times