Wise Decisions with the I Ching: An Intuitive Approach for Understanding the Answers and Solving your Problems (Paperback) 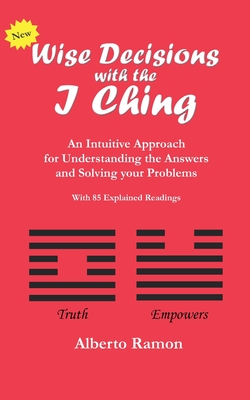 Wise Decisions with the I Ching: An Intuitive Approach for Understanding the Answers and Solving your Problems (Paperback)


Usually Ships in 1-5 Days
The holistic approach to interpretation presented in this book reveals clear and direct answers to your questions in everyday language. According to this approach, perceiving the big picture--the hexagrams from a reading and the meaningful pattern that they form called the theme--allows the reader to understand the moving lines and the other texts contextually. To facilitate this process, this book includes a dictionary that expands and modernizes the meanings associated with each hexagram. For instance, hexagram 59, Dispersion, can also refer to distribution, sharing, marketing, etc., depending on the question asked. This approach makes it easier to recognize the answer in a reading because it reveals the only few relevant patterns formed by the resulting hexagrams. This book contains 85 fully explained readings. It includes the Web address of the classic book "The I Ching or Book of Changes" by Wilhelm/Baynes, where the moving lines and the other texts can be easily found. Wise Decisions with the I Ching can also be used as a companion guide to any other unabridged version of the I Ching. Alberto Ramon, MS in Engineering, helps his clients formulate strategic questions and make the best possible decisions on business and personal issues. Mr. Ramon resides in Northern California. His website/blog is YourInsightfulDecision.com.
Alberto Ramon was born in Argentina. He took courses in advanced mathematics and immigrated to the United States in 1970 where he earned a Master's Degree in Engineering from the University of California, Berkeley. He worked as an industrial engineer until 1975. Fascinated with computers, he worked as a programmer for 20 years. In 1990 he started an academic career teaching computer science courses for 17 years. Mr. Ramon's interest in the I Ching began in 1974 when he came across this book while browsing in a Berkeley bookstore. He overcame his initial skepticism and started to consult the I Ching when he learned that Carl Jung, the famous Swiss psychiatrist, used it extensively. Eventually, inspired by a dream, he conceived a holistic approach to simplify the interpretation of I Ching readings based on the notion that intuition proceeds from the whole or "big picture" to the details. This insight led him to the study of the I Ching hexagrams as whole symbols with each representing a category of related meanings. He also incorporated the concept of "pattern recognition" in his approach. How the hexagrams from a reading relate to each other and to the question posed was the basis of his research of the I Ching. Clarity and simplicity were his motivations for writing Wise Decisions with the I Ching. Since 1990, Mr. Ramon taught classes and gave presentations on his approach to the I Ching. He works now as an intuitive business consultant. Mr. Ramon currently resides in Northern California.