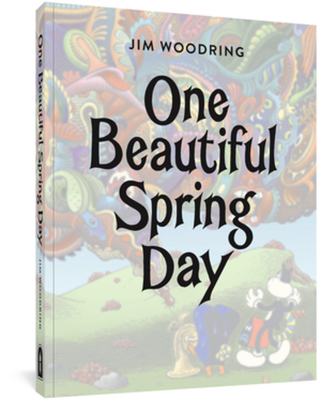 A mesmerizing, mind-bending, wordless 400 page comics odyssey by a contemporary master of the form.

Jim Woodring has been chronicling the adventures of his cartoon Everyman, Frank, for almost 30 years. These stories are a singular rarity in the comics form — both bone-chillingly physical in their depictions of Frank’s travails and profoundly metaphysical at the same time. Not since George Herriman’s Krazy Kat has the comics language been so exquisitely distilled into pure, revelatory aesthetic expression.


Designed as a luxe paperback with vellum jacket, One Beautiful Spring Day combines three previously published volumes —Congress of the Animals, where Frank embarked upon a life-changing voyage of discovery, Fran, where he learned, then forgot, that things are not always what they seem, and Poochytown in which Frank demonstrated his dizzying capacity for both nobility and ignominy — along with 100 dazzling new pages conceived and drawn by the author. The result is a seamless, 400 page graphic narrative that forges a new and even more poignantly realized single story that takes readers deep into the hidden meanings of the previous stories and offers the most full, complete, astonishing exposition of Frank and his supercharged world to date.

Frank’s curiosity and risk-taking mixed with a dose of, let’s face it, wanton recklessness, takes him on a series of terrifying peregrinations that often leave his soul and body shattered, and the reader in a state of creative exaltation. Suffice to say that if you are a friend to Frank you will find One Beautiful Spring Day to be a thousand-course feast of agonizing bliss, soul-stirring mystery and luminous depth. This is undoubtedly one of the great novels of the 21st century, graphic or otherwise.

Jim Woodring lives on Vashon Island in Washington State’s Puget Sound with his wife, Mary. The recipient of numerous award — including The Stranger's Genius Award for Literature — he is an animator and a fine artist as well as a cartoonist.

The effect is something like Doré meets Dalí: stories of pure dream logic rendered as reverently as an etching of the infant Christ. Every surface emits a kind of otherworldly specificity, both resoundingly weird and as reassuringly solid as a drafting table.
— The New Yorker

One epic story at the surreal dream crossroads of zaniness, pathos, and terror. ... an experience like no other in comics.
— Booklist (Starred Review)

Mr. Woodring [has] extraordinary gifts as a draftsman, storyteller and creator of hilarious characters and hallucinatory situations...
— Ken Johnson - The New York Times

Welcome to another voyage into the visceral sublime with Jim Woodring, whose uniquely mind-expanding narratives draw equally on Buster Keaton, Max Ernst, and an cross-section of our planet's DNA code apparently extracted in a secret hi-tech laboratory by the mad scientists who control our fates.
— Jonathan Lethem