Braver Than I May Know (Hardcover) 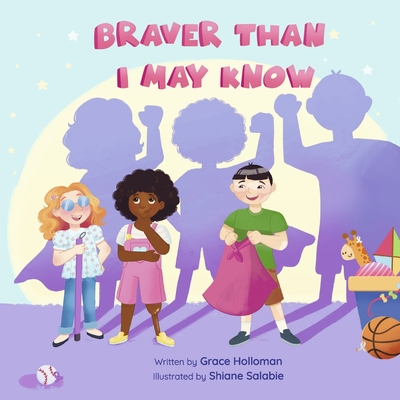 Braver Than I May Know (Hardcover)

By Grace Holloman, Shiane Salabie (Illustrator)
List Price: $24.99
Our Price: $22.49
(Save: $2.50 10%)
Usually Ships in 1-5 Days
"Braver Than I May Know" is an encouraging, creative, poetic introduction to a series of books that showcases the bravery of children living with different conditions, physical impairments, and the individual challenges they overcome in their day-to-day lives.

Ranging from Sickle Cell Disease to Leukemia to Spina Bifida and others, the goal of this series is to raise awareness of these conditions, while simultaneously giving children who have them continued hope for their future. While there may be many hardships to endure throughout life, they can still thrive as their conditions do not define them. As human beings capable of love, deep thought, and the ability to do amazing things, our children should be reminded of the beauty of life while grappling with their medical condition. What originally began as an attempt to offer comfort to my own daughter, who has Sickle Cell Disease, has evolved into a means of support for all children with varying afflictions. Our goal with this series is to educate, inspire, and help teach compassion and understanding to children and parents who are fortunate enough not to be affected.
Grace Holloman is a devout Christian, a loving wife, and a dedicated mother of two beautiful daughters. The Arkansas native endured a turbulent childhood that would inadvertently lead her to writing poetry, allowing herself to both process her emotions and explore the depths of her resolve. She also developed a love for basketball during this time as another means of self-expression.

She continued to play basketball throughout high school and would graduate from Ozark Adventist Academy. She would continue her education by putting herself through Union College in Nebraska, where she received her bachelor's degree.

Grace returned to Arkansas after a meniscus tear and began a career as a personal trainer until she decided to join the military in the fall of 2013. It was three days after enlistment that she would meet her future husband by calling for internet service. Grace would proceed to serve our country as a member of the Arkansas National Guard serving as a Military Police Officer. She maintained this position with the armed forces until a year after the birth of her first daughter, who was diagnosed with Sickle Cell Disease at two months old. Grace has since become an advocate for Sickle Cell as well as women's maternal health and postpartum care.

After the birth of her second daughter in 2020, she received her master's degree from the University of Kansas. She has continued to advocate for better healthcare for mothers and children who live with health conditions from birth or that develop later in life. In an effort to bring more awareness to children with underlying health conditions, Grace felt compelled to utilize the same poetry that inspired her to overcome traumas in her life. This is all in hopes to inspire the next generation to push past their conditions and aspire for greatness in whatever form it chooses to manifest in.

Grace and her family currently reside in Oklahoma where she owns a couple of small businesses, advocates for women's health, and continuously promotes the health benefits of breastfeeding. This dynamic mother of two loves to foster creativity and expression in her daughters. She is a huge fan and supporter of the WNBA and all other women's sports. She enjoys yoga, dancing, basketball, poetry, and spending time with her family. Grace hopes to use her writings to inspire children born with medical conditions to continue to pursue their dreams as well as teach awareness and compassion for others.