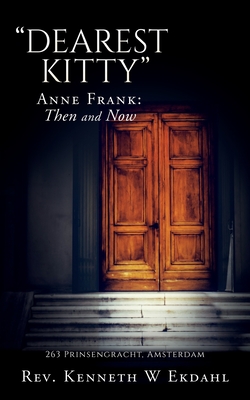 
Usually Ships in 1-5 Days
My classmate Mike Burke and I toured the Anne Frank Foundation (Fonds) Annex in Amsterdam, Holland, and after visiting the gift shop, ventured over to a downstairs diner across the street. Soon an elderly gentleman asked if he might sit with us and so he did. Noticing my two books, A Diary of a Young Girl and Europe on 5 Dollars a Day, he asked to see one. As I passed him the Europe book, he shook his head, and asked for the other one. As the man spoke of the site which we had just toured, we were spellbound but had no clue who he was. This gentle man took our receipts, and exited, but not before handing me his card: Otto H. Frank, father of Anne Frank. This true story begins on April 17, 1968. Born in East Orange, N.J., Father Ken Ekdahl has also lived in California, Florida, Georgia and Rome, Italy, while traveling and living in many other places. An alumnus of Mt. St. Mary's University ('69), Father also attended Loyola University of Rome ('67/'68). In September of 1969, Fr. Ken was employed by CNA Insurance in New York City and later moved to AIG in New York and Los Angeles as an Accident and Health Senior Underwriter, returning three years later. After much prayer and guidance, Fr. chose to enter Pope (St.) John XXIII National Seminary in Weston, MA in the fall of 1986. Ordained May 18, 1991 for the Diocese of Trenton, he served in all four counties of the Diocese (Mercer, Burlington, Ocean and Monmouth). Although he has written several plays, and has always loved writing poetry, songs and stories, this is his first (non-fiction) book.