We Are Akan: Our People and Our Kingdom in the Rainforest - Ghana, 1807 - (Hardcover) 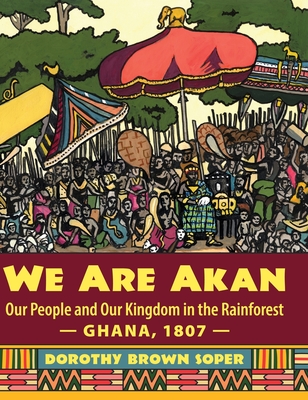 We Are Akan: Our People and Our Kingdom in the Rainforest - Ghana, 1807 - (Hardcover)

1807: KWAME, KWAKU, AND BAAKO live in the most powerful kingdom in West Africa. Kwame is the son of a chief. Kwaku is the likely successor to the chief. Baako is a slave earning his freedom. The boys are good friends who work together daily. Guided by their families, elders, ceremonies, and stories, Kwame, Kwaku, and Baako strive to become leaders in the Akan culture.

In the capital city to see the king, the Golden Stool, and the Odwira festival, the boys meet foreign people, learn about writing and books, and witness the sale of slaves. Kwaku cares for a leopard cub that the king wants returned to the forest. On a mission to the coast, Kwame and Baako are kidnapped and threatened with sale to the slave trade.

﻿The Asante Kingdom faces rebellion and the decline of its role in the Atlantic slave trade. Change will come. Kwame, Kwaku, and Baako balance the life they know with new possibilities for their future.