Thanksgiving: The Holiday at the Heart of the American Experience (Paperback) 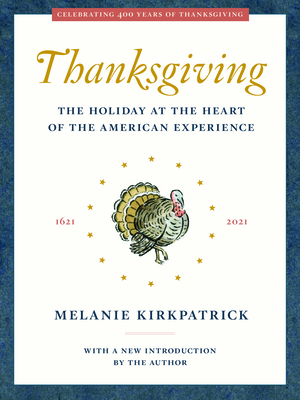 Thanksgiving: The Holiday at the Heart of the American Experience (Paperback)

By Melanie Kirkpatrick
List Price: $29.99
Our Price: $26.99
(Save: $3.00 10%)
Usually Ships in 1-5 Days
We all know the story of Thanksgiving. Or do we? This uniquely American holiday has a rich and little known history beyond the famous feast of 1621. In Thanksgiving, award-winning author Melanie Kirkpatrick journeys through four centuries of history, giving us a vivid portrait of our nation's best-loved holiday. Drawing on newspaper accounts, private correspondence, historical documents, and cookbooks, Thanksgiving brings to life the full history of the holiday and what it has meant to generations of Americans. Many famous figures walk these pages--Washington, who proclaimed our first Thanksgiving as a nation amid controversy about his Constitutional power to do so; Lincoln, who wanted to heal a divided nation sick of war when he called for all Americans--North and South--to mark a Thanksgiving Day; FDR, who set off a debate on state's rights when he changed the traditional date of Thanksgiving. Ordinary Americans also play key roles in the Thanksgiving story--the New England Indians who boycott Thanksgiving as a Day of Mourning; Sarah Josepha Hale, the nineteenth-century editor and feminist who successfully campaigned for Thanksgiving to be a national holiday; the 92nd Street Y in New York City, which founded Giving Tuesday, an online charity established in the long tradition of Thanksgiving generosity. Kirkpatrick also examines the history of Thanksgiving football and, of course, Thanksgiving dinner. While the rites and rituals of the holiday have evolved over the centuries, its essence remains the same: family and friends feasting together in a spirit of gratitude to God, neighborliness, and hospitality. Thanksgiving is Americans' oldest tradition. Kirkpatrick's enlightening exploration offers a fascinating look at the meaning of the holiday that we gather together to celebrate on the fourth Thursday of November. With Readings for Thanksgiving Day designed to be read aloud around the table.

Melanie Kirkpatrick is a senior fellow at the Hudson Institute and a former deputy editor of The Wall Street Journal's editorial page. She is the author of Escape from North Korea: The Untold Story of Asia's Underground Railroad, which World Magazine named its 2013 Book of the Year. She has lived in Tokyo, Toronto, Hong Kong, Honolulu and Manhattan, and currently resides in rural Connecticut with her husband, Jack David.