The House That Ruth Built (Hardcover) 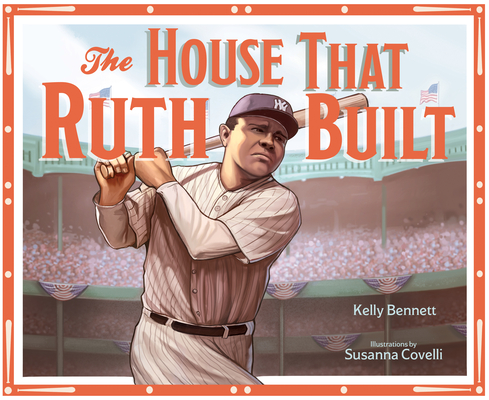 The House That Ruth Built (Hardcover)

On April 18, 1923, the New York Yankees played against the Boston Red Sox in their very first game in the brand-new Yankee Stadium. All the key players were there—future Hall of Famers Babe Ruth, Waite Hoyt, Bob Shawkey, Miller Huggins—and so were the supporters—Eddie Bennett, the legendary Yankee batboy; Jack Lenz, Yankee Stadium’s first public announcer; five-year-old Little Ray Kelly, Babe’s lucky charm; and more than 70,000 fans! Every person in the stadium on opening day was part of this legendary event, and now you can be too.

With beautiful, true-to-event illustrations reminiscent of Norman Rockwell, and with facts on every page about the stadium, the teams, and that very first fateful game that christened the original Yankee Stadium, The House That Ruth Built is the perfect book for kids and baseball fans everywhere. Take a step into the past and watch the baseball greats make history!

Kelly Bennett is the author of many award-winning books for children—mostly picture books. Her stories, such as Not Norman, A Goldfish Story, a Jumpstart Read for the Record book; Norman, One Amazing Goldfish, Vampire Baby; Your Daddy Was Just Like You & Your Mommy Was Just Like You; Dance, Y’all, Dance; Dad and Pop; and One Day I Went Rambling, an Illinois Library Association’s iREAD selection, celebrate imagination, families, friends, pets… all that goes into being a kid! 2023 will see the release of Kelly's, The House That Babe Ruth Built with Familius. To see more, please visit www.kellybennett.com

Kelly is a graduate of VCFA’s Writing for Children and Young Adults program, and a long-standing member of SCBWI and The Author’s Guild. A former ARA for SCBWI-Houston, Kelly now divides her time between Houston, TX, Westhampton Beach, NY, and Mimiville (which is anywhere her grandboys may be).


Kelly hit a grand slam with this wonderfully illustrated book that tells the historic story of Yankee Stadium. The House that Ruth Built is rich with details, fascinating facts, and of course, Babe Ruth!—Sean Holtz, Baseball Almanac

Between the fun story, the informative facts, and the amazing illustrations, The House That Ruth Built is a great introduction to baseball, Yankee Stadium, and Babe Ruth for children!—Cassidy Lent, National Baseball Hall of Fame Museum