Of Ice and Men: How We've Used Cold to Transform Humanity (Hardcover) 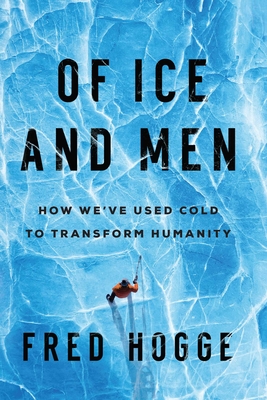 Of Ice and Men: How We've Used Cold to Transform Humanity (Hardcover)

An exploration of humanity’s relationship with ice since the dawn of civilization, Of Ice and Men reminds us that only by understanding this unique substance can we save the ice on our planet—and perhaps ourselves.

Ice tells a story. It writes it in rock. It lays it down, snowfall by snowfall at the ends of the earth where we may read it like the rings on a tree. It tells our planet’s geological and climatological tale.

Ice tells another story too: a story about us. It is a tale packed with swash-buckling adventure and improbable invention, peopled with driven, eccentric, often brilliant characters. It tells how our species has used ice to reshape the world according to our needs and our desires: how we have survived it, harvested it, traded it, bent science to our will to make it—and how in doing so we have created globe-spanning infrastructures that are entirely dependent upon it.

And even after we have done all that, we take ice so much for granted that we barely notice it.

Ice has supercharged the modern world. It has allowed us to feed ourselves and cure ourselves in ways unimaginable two hundred years ago. It has enabled the global population to rise from less than 1 billion to nearly 7½ billion—which just happens to cover the same period of time as humanity has harvested, manufactured, and distributed ice on an industrial scale.

And yet the roots of our fascination with ice and its properties run much deeper than the recent past.
Fred Hogge is a historian and filmmaker who has collaborated on or ghost-written books on a wide variety of subjects from the history of cocktails to martial arts. He is British by birth and lives in Thailand.

“[Of Ice and Men] is funny and quirky and full of well-told stories. Hogge, a gifted storyteller, brings many subjects to cinematic life. He ties the book up beautifully, with a detailed, well-explained chapter on climate change. This book will amuse and inform you.”
— Mark Kurlansky, The New York Times Book Review

“A fascinating history of an important and timely subject that we have taken for granted for too long.”
— Stanley Tucci, American actor and filmmaker

"In his first book written under his own name, [Fred] Hogge gives ice its due in this fascinating natural history. Hogge writes with wit and flair, bringing natural history alive in a way that will have great appeal for those who enjoy the work of Mary Roach and Bill Bryson."
— Booklist, starred review

“[Fred] Hogge makes his solo debut with an illuminating and wide-ranging look at one of humanity’s most overlooked natural resources: ice. Hogge gathers an impressive collection of arcana. This sparkling history informs and entertains.”
— Publishers Weekly

“Hogge makes many fascinating points and digressions in this casual history about applications of cold.”
— —Library Journal

"Fire and ice may be polar opposites, but each has shaped human history and impacts our daily lives. In Of Ice and Men, Fred Hogge harnesses both the  importance of ice and its role from the cardiovascular to the chalets and slopes of Chamonix, and the ominous impact of rapidly losing ice globally. That he does so with both the empirical and anecdotal, insight and humor, will keep the reader turning page after page."
— Douglas Heye